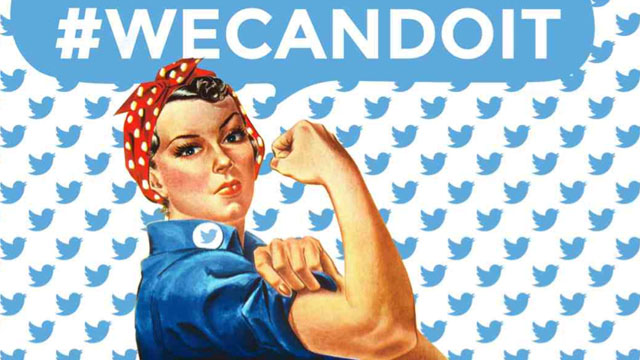 There’s no question that Twitter has become one of the most influential social media platforms of the 21st Century.

These days you need only check your twitter feed for the latest updates on news, entertainment and culture trends; all of it tangled up in a rather overwhelming amount of differing opinions now able to be heard, gain retweets and travel to every corner of the world. Is it any wonder that this brave new land has become home to the resurgence of grassroots feminist activism?

Here’s a list of Feminist Activists that are continuing to ask questions and demanding to be heard. If you feel inspired, why not do the same?

Caroline is a journalist, author and feminist campaigner known for co-founding The Women’s Room and campaigning for better female representation in the British Media. There’s never a dull moment on her timeline and enough brain food to last for days. Also check out her book “Do it Like a Woman”, I’ve yet to read it but have a sneaking suspicion it might be brilliant.

She’s a broadcaster, TV Critic, columnist at The Times and of course the best-selling author of “How To Be A Woman”. Her twitter bio most accurately states “Writing the fuck out of shit since 1992”, and you better believe it.

Karen runs the chilling but brutally necessary @CountingDeadWomen account. The concept is straight forward; counting UK women known or suspected to have been killed by men and letting it be known to the public. It might be hard to talk about, but one woman dead every 2.8 days… that’s not something to be silent about.

Nimko is the co-founder & CEO of @DaughtersofEve, a UK campaign and support charity dedicated to ending FGM that has gained considerable and crucial attention during the last few years. She’s a survivor herself and a campaigner tweeting sisterhood since 2011.

Laurie is a journalist and author of “Unspeakable Things: Sex, Lies and Revolution” – a brave and ruthless must read. Her tweets are often an open invitation to discussion, *respectful discussion I might add, trolls are effectively crushed.

Melissa is the managing editor of @EvrydayFeminism, an online magazine on everything feminist, and a brilliant one at that. Passionate about body acceptance & eating disorder recovery, her tweets are daring and empowering.

Jean caused quite the stir last year with her petition against rapist footballer Ched Evans. The petition asking for Sheffield United not to reinstate convicted rapist Evans gained more than 169,000 supporters yet Jean faced enormous backlash online for speaking out. But that didn’t stop her!

Emer O’Toole is an Irish Studies Professor at Concordia University, she is a brilliant columnist for the guardian and a campaigner supporting ‘repeal the 8th‘, a gathering of signatures to call for a referendum of the Eighth Amendment to the Irish Constitution so that full reproductive health services such as abortion can be made available in Ireland.

Apart from being an outstanding comedian she is also a tirelessly devoted activist with telepathic abilities I suspect, since she manages to be everywhere in London’s feminist circles! You can also sometimes find her arguing with unreasonable, grumpy people on the telly. But twitter is a good place to start.

Rhiannon is a freelance writer and co-editor of the fantastic @VagendaMagazine that challenges and exposes tired old tricks of the media. There is also a book “The Vagenda: A Zero Tolerance Guide To The Media”. Expect plenty of deliciously thought provoking material!

It takes courage to speak out about anything in the online landscape today now that anyone could be a potential target of ill-willed and misinformed anonymous (or sometimes known) trolls.

Being an activist does no longer necessarily mean standing at the barricades holding signs. We’ve taken the placards into cyberspace and converted them into tweets, and if you’re tweeting things that matter then congratulations, you’re an activist!