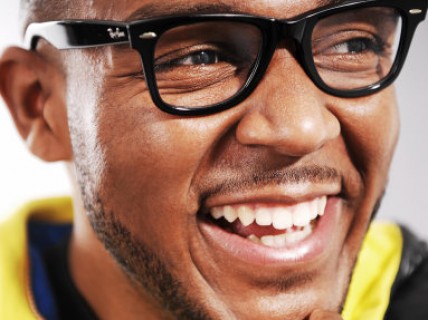 1xtra Live, the annual concert thrown by BBC Radio 1xtra has been a tradition around the country since 2008. Since its launch, the event has grown to become one of the biggest free urban music spectacle. And though, he may boast one of the most popular radio shows on BBC Radio 1xtra, MistaJam, is probably the most-ego free superstar DJ currently around. We caught up with the party-rocker himself to talk Simon Cowell, turning down Celebrity Big Brother, and find out what’s in store for the BBC 1xtra Live crowd. Are you excited about 1xtra Live?

Really, really excited because the last event was kind of unprecedented for me as I’m used to being the guy, who normally watches other people doing stuff but being able to host this year is incredible. Seeing all the acts that performed last year I think this year, I kind of know what I’m doing, so I should be able to enjoy it a bit more.

What would you say makes an event like 1xtra Live such an ultimate experience?

The thing that differentiates 1xtra live from other radio events is the fact that the DJs are an integral part of it. At 1xtra we really pride ourselves on being a station that breaks artists and ultimately, the reason why we are able to break as many artists as we do is because we’ve got DJs, who are completely on the top of their game. So having them as part of the live events is always really important.


Apart from a pretty boom bastic line-up of artists, what can we expect this time round?

If I’m honest I’ve got a lot of friends from other radio stations and when I was announcing the line-up, I got a lot of text from those friends basically being jealous. I think the line-up is just truly ridiculous. From people like Kendrick Lemar who everybody is talking about to Disclosure, Alicia Keys and Rita Ora, there really is something for everyone on each of the line-up. When these artists perform for 1xtra they do things slightly differently because they know our listeners really know their music. I think people will be really surprised by what goes down on that stage.

Has there been a time when the crowd has not responded the way you wanted them to?

All the time but I think the way to handle it is by moving on very quickly. If they haven’t done what you would like them to do, then move on.

So, what’s the worst interview you’ve ever done?

The position I’m in is a very privileged one. In fact, I don’t tend to interview people that are not interesting, so I’ve never really had a bad interview as I have been very lucky in that respect.  A lot of US artists on the whole are very monosyllabic and there are a good few hip hop and grime artists who are pretty much like trying to get blood out of a stone, but when you do get something from them, it makes it worthwhile.

Out of all the tunes you have in your record box, which one never fails?

I suppose at the moment its Julio Bashmore ‘Au Seve’. I’ve been playing that record since February and it’s continued to roll over the course of this year.

Are you hoping to one day present the breakfast show? Isn’t that the goal for all Radio DJs?

I think it’s a goal for radio DJs. If I were to present a breakfast show, it would be very different to any other breakfast show that has existed. I do not have any immediate aspirations because I love what I am doing at the moment. I’m not playlisted which means I am essentially able to play the music, I love to a very big audience. I’m not too sure if they would give me such freedom on the breakfast show.[Laughs]

Are there any songs that really get on your nerves?

To be honest no because gangnam style has died down now. [Laughs]

My mum’s heard of you. Do you realise that officially makes you a household name?

I am very happy to hear your mum’s heard of me, she’s definitely got a great taste in radio.

Simon Cowell: love him or loathe him?

Love him! Do you know why? Because he doesn’t pretend to be something that he’s not. He’s the ultimate marketer, and he knows that he doesn’t know a lot about music, so he employs people that do know about music. I do not agree with everything that he does, but I can’t loathe him for it as he is a very clever man.

I think that the checks that I get from the endorsements of checks.

If you had to give away every CD you own, and were only allowed to keep one, which one would you keep behind?

I think I would keep the Blu-ray part of my collection on MP3…[Laughs] Any DJ that can easily answer a question like this isn’t a real DJ.

What’s your connection with Rudolph Walker? [Patrick Truman from EastEnders]


We don’t really have a close connection but I did work with him once. I was in an episode of Eastenders which gave me the opportunity to sit down with him, and he gave me some really good career advice. We haven’t got a very close connection even though he does look like my granddad.

Apparently, you’ve been asked to do Celebrity Big Brother?

Yeah, I turned it down! I am not interested because I’m not a celebrity, I am a DJ. You don’t exactly know what celebrities actually do, but you know what TV presenters, DJs and actors actually do, and that’s the big difference.