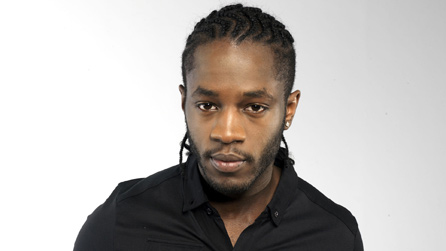 Twin B has been the reigning voice of 1xtra’s weekday breakfast show for over two years now and his repertoire in the music world is untouchable. As the mastermind behind a number of successful artists, the untiringly rocking, high-energy DJ is living the best of both worlds, too. Appearing on his breakfast show means you’ve made it in music. These days, he’s responsible for introducing artists such as Wretch 32 to his namesake, and giving Sneakbo a platform to show off his breakfast rap bars. What sort of relationship does 1xtra have with this year’s artist line-up?

The fact that these are artists we supported from the beginning really advertises and shows the world our passion. These are artists whom we’ve all got direct relationships with and believe in.  A lot of people look down at Tulisa but what they do not understand is that she represents the whole do it yourself work ethic. I know the journey of N-Dubz, and the fact that they have travelled through so many platforms makes me believe they represent a certain part of urban culture. Kendrick Lemar, who is seen as the future of hip hop is also heavily supported by us, and his album is one of the best I’ve heard in a long time. I have also known Rita Ora since she was a teenager, so as I’ve mentioned we have close relationships with some of these artists. To see them, reach the stage that they have and for them to come back and tour with us is amazing.

Rita Ora is giving her debut live solo performances at 1xtra Live. Is she going to blow away the competition?

I think people forget her age because she is so accomplished and comes across as someone who has been around for ages, but I think people need to realise she hasn’t. Alicia Keys is someone who has been in the game for a long time, but with Rita this is her first album and the start of her journey as an artist, which is exciting. She’s also a great performer with natural talent and will get better and better. I think it’s great that we’ve got her following on from the likes of Emeli Sande and Jessie J.

What’s it like backstage at 1xtra Live? Is it anything like the scene from Titanic or Independence Day?

Not really, but last year the catering was nice. There were some toffee desert cakes, which after eating felt like a party in your mouth. [Twin B begins to groan] …I’m hoping, that’s the same but in general it’s just a buzzing atmosphere. A lot of the artists are friends and us as DJs have great relationship with most of them. The thing with 1xtra and the listeners, is people who listen choose to listen to us because they know and love what they are going to hear so that’s why it’s great to get on the road and for us to meet these people.

Where did the name Twin B come from?

I’m called Twin B because I have a stunt double. I share my face with a twin brother, and ‘B’ is pretty much for whatever you want it to be – buff, beautiful, brainy or whatever. As you know, there are also many great B’s in the world, you’ve got Plan B, Katy B Lethal B, Misha B, and sometimes we all get together and hate on other letters.  [Laughs]

What is the weirdest thing about you, or the most shocking statistic?

I have got a really, really, really long tongue. I am also really good at maths, and I have this weird relationship with music where I can actually remember lyrics very quickly.

Is it a bit strange to be hosting a popular show? Do you consider yourself to be a celebrity at all?

I remember talking in a shop and someone recognising my voice which was the weirdest thing ever. I love music with a passion and that’s the driving force behind everything, but I think at the same time I like to have more fun than the average person. I have fun on air every morning and for that to provide a platform for me to have a career is amazing but also very weird.

Many people may not know this but Gyptian, Wretch 32, Yasmin and Tinie Tempah have you to thank for a percentage of their success, right?

Yeah – like I said I have got a passion for music and that’s not just outside radio and Djing it also travels in terms of how I spend my day. I run a record label with a friend [Richard Antwi] called Levels, where we invest our time and our own talents into people, we believe in.  Wretch 32’s album [Black And White], was the first we released and to our surprise, it went gold. Last year, was our first active year as a label, and we sold over 1.5 million records across singles and albums from Wretch, Yasmin and Gyptian.

Does that mean you can now retire?

Oh wow, I wish. [Laughs] Not yet as I plan to continue doing the 1xtra breakfast show until I’m bald like Trevor Nelson. I love doing the show and everything else I do because when you have a passion, you tend not to see an end to it.

Can you see yourself on Radio 1 for the near future?

Obviously, Radio 1 is an amazing platform, but I really do strongly believe in what we do at 1xtra. I think there’s a real need to do the things we do there and everyone who works for 1xtra believes in the music and what we stand for. To be honest I can’t predict the future, but I am happy where I am at the moment.

Have you ever been tempted to try your hand at comedy or writing a sitcom?

No, not really. I just have fun being me and I truly believe that radio provides that outlet that enables me to have fun.

One of the most popular features on your show is ‘Best Of British’. Have you thought about taking it onto Television?

I mean if I could help provide another platform for amazing UK artists to get heard, then whatever that is I  am all for it.  Even though, it’s part of the breakfast show it’s an important feature because it reinforces the things I believe in which is providing a platform for talented artists, and as long as any of those things can support that then I’m up for it.

You’ve interviewed pretty much every artist, but my favourite was with Usher when he admitted to you “Oprah Winfrey stole his glasses“.

I am still trying to holler at Oprah to get the classes back, but she ain’t picking up the phone, which I think is a bit of a par. [Laughs] Oprah, doesn’t call me back these days, I think she’s changed.

Twin B will be co-hosting BBC Radio 1Xtra Live in Birmingham with MistaJam on Thursday 15th  November 2012. Listen live on Radio 1Xtra & Radio 1 from 7pm. Watch live at bbc.co.uk/1xtra and on the BBC Red Button.