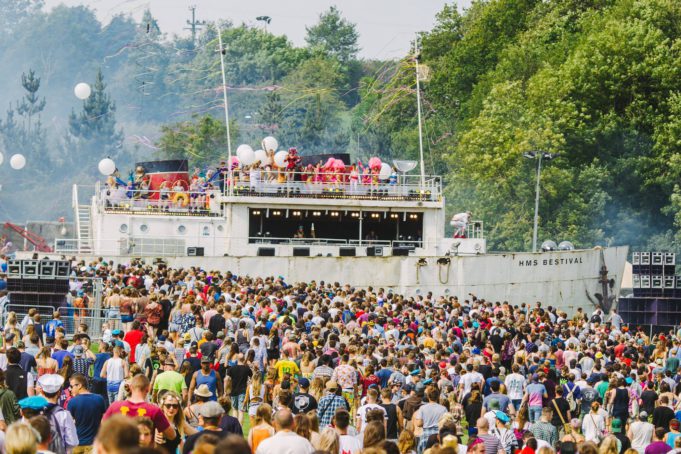 There’s a whole cumulation of festivals these days, some that you’re happy to get a taster of and some that seize you like a bountiful magnetic force.

With less than 2 months of summer festivals to go, Flavour Mag have accepted Bestival’s mission to beam into a time-warp so weirdly delightful the chances of wanting to come back to 2016 style civilisation will be slim and futile.

Sure, all festivals are fun but Bestival, located at Robin Hill Country Park, Isle of Wight has an atmosphere so unfathomable you’ll think you’ve entered the twilight zone. With hippy vibe communions, a spaceport leading you through an unsuspecting galaxy of music, tranquil activities, boisterous but harmonious tents, this is one to end summer on a high. He’s got the right temperature to shelter you from any possible storm, he loves to get busy and he’ll give you the light when you’re desperate for an early morning porter loo dash… if you hadn’t guessed the once canerowed, mohican topped and now shaved Jamaican rapper, Sean Paul, is finally heading to a UK festival. We can’t always understand what he’s talking about but with a heavy soundtrack featuring Ever Blazin, Like Glue, Temperature, She Doesn’t Mind and Punkie, his set will make us vortex through 16 years of reggae and dancehall riddims amidst the main stage.

Also on the main stage will be US rapper Wiz Khalifa, The Cure and Katy B to name a few. 2. Party On the Moon

Whilst Richard Branson mills around on project: Get us into space, Shy Fx have brought us just that little bit closer to partying on the moon, desirable because you won’t have to worry about gravity. Bringing with them General Levy, Giggs, Nadia Rose, Redlight and Masterstepz, find them at the Bollywood tent, one of the most jaw droppingly ornate albeit dewy locations on site. Embodying everything that Bestival stands for (Free The Universe and Peace is the Mission) are US 3 piece producing extraordinaires Major Lazer, who cause a chaotic feast of fun wherever they go. Known to spray crowds with Major Lazer dollar bills y’all, encapsulate with their dancehall dancers and zorbe into a party of people who flock to witness their musical celebrations, you know you want to shake a leg to Light It Up, Lean On, Watch Out For This and Bubble Butt.

How could you not? You can usually find them at the port, under a sea of pyrotechnics but this year we swapped sea for meteorite surfaces with the newly spruced spaceport. Across the festival you’ll witness Carl Cox, Fatboy Slim, My Nu Leng, Toddla T, Richie Hawtin, David Rodigan and DJ Yoda. Don’t forget your space helmets! We’ve always thought the Isle of Wight was epic but the way in which Bestival can embody so many global locations, cultural settings and times in history with varying ideals of fun is almost delirious. Taking us from Bollywood, to the 1970’s commune that features psychedelic and flag strewn patches of peace. Careering from the aztec like Temple Island where in 2015 Kurupt FM got things popping, to a moulin rouge inspired fantasy land of cirque- witness a concoction of all things circus related and enthralling. Some pack their bags and their programmes with aims to see the who’s who of past, present and future music but you’ll not be too hard on yourself when you’re 30 strong list of artists to see dwindles down to a solid 10. We say this because at Bestival you’ll not walk twenty yards at a time for seeing things out of the ordinary; with games to sign up to on a whim, a wall of death, speakeasy’s, performances, comedy and debates, you’ll be in awe of creative furore and crowd participation. None more have walked the land doused in glitter, clad in leggings, consumed by novelty and engulfed in retro patterns than those dwelling at Bestival. Where the men dress as provocatively and vivacious as the females, sashay down to The Amphitheatre where drag fags and karaoke await, enter into catwalk shows or just make the rolling fields your runway. This is your chance to feel footloose and fancy free. From the legends that have been on the scene since before some of us were born, take The Cure and Norman Jay MBE for example, to television champs The Chuckle Brothers and grime scene kings Wiley, Skepta and Kano. They’ll be a unique legend for every festival goer but none more deserving than one half of team Bestival and DJ maestro, Rob Da Bank.

They’ll be an act to make you reminisce and brand spanking new acts that you’ll look back on fondly. They say that’s how you win the race but Slow Motion is everything and more about escaping the rat race. Release the beast by partaking in yoga classes, by stroking llama’s, bubbling away in hot tubs, off- site paddle boarding and moreish massages. 10. The ending of all endings.

You thought you’d have to wait until November before you could become all starry eyed and astounded by a glitter filled sky but Bestival has been known to put on one of the most spectacular firework shows around. Set to a soundtrack that quite frankly turbo blasts Katy Perry’s ‘Fireworks’ into smithereens, you can expect to bathe in the funk and rock sounds of the late Prince.

Witness an audio visual tribute like no other upon Stardust field where the end is anything but nigh, this is where Purple Rain becomes a Purple Rave.

Choose to accept this futuristic fate and let it change the way you festival forever.