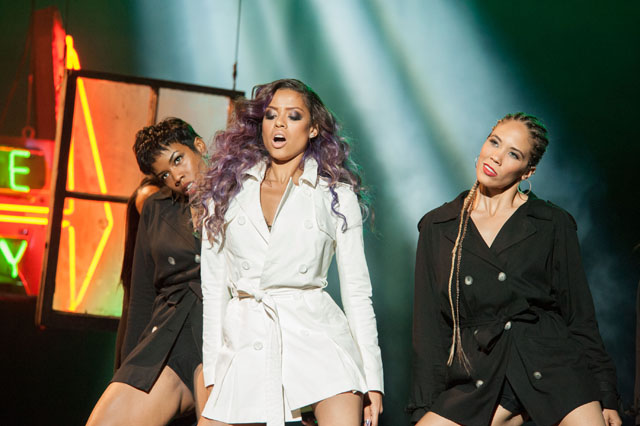 With the release of Beyond the Lights on DVD and digital on the 29th of June, we wanted to shine some light on this little gem of a film. What better way to do that than to put together our very own 10 reasons you need to watch Beyond the Lights.

Though she’s been groomed for stardom all her life by an overbearing mother (Minnie Driver), singer Noni (Gugu Mbatha-Raw) is having trouble dealing with her success. Feeling unable to cope any longer, Noni tries to kill herself, but luckily Kaz (Nate Parker), the police officer assigned to be her bodyguard, thwarts her suicide attempt. Noni and Kaz feel an instant attraction, but those in their orbit oppose the romance for fear the pair will stray from the course planned out for both of them.

Gugu Mbatha-Raw gets to show off the raunchy side of herself as the main character Noni, exploited by her pushy mother and the dollar signs in the male-dominated music industry. Yes sex sells and Gugu looks amazing but what price does her character have to pay in order for her success! 2. Gugu Mbatha-Raw showing us that natural is still sexy.

Thankfully, we get to see the natural beauty of Gugu when Noni decides to strip herself of her fake, public eye self in order to find herself. Natural is also beautiful, even more so in our modern times when woman of all ages are pressurised into being something they are not just to be accepted by society and shallow men in particular. Check out our piece Gugu Mbatha-Raw: Where have you seen her before HERE.

3. Nate Parker getting his shirt off.

Nate Parker plays Noni’s love interest and the man that ultimately sees’s the frightened, unhappy girl behind the facade and saves her. He has a slight mix of a young Jamie Foxx and Denzel Washington about him, which is never a bad thing. One scene that stands out is when he has to take his shirt off to bandage Noni’s cut hand. It’s safe to say the ladies will be happy at the sight of his naked torso. The soundtrack to Beyond The Lights is full contemporary R&B, Soul and Hip Hop which 90% of tracks are actually performed mostly by the cast including Gugu herself, proving she isn’t just a good actress but has a pretty decent voice too. Other tracks include “Worthy” by Jacob Banks and “Grateful” by Rita Ora.

Minnie Driver is a veteran British actress, who has been around for years and is a bit of a favourite in the US acting scene. She plays Noni’s overbearing, pushy mother who seems to not give a damn about her daughter’s mental well being as long as they are making the big bucks. She’s so convincing she makes you want to give her a slap yourself. Check out our piece Minnie Driver: Where have you seen her before HERE

6. A couple of cameo spots from people you might just recognise.

Beyond the Lights is also littered with a few cameo appearances from some pretty well known names. The biggest name to appear, if it was only for a mere few seconds, was Chaka Khan when she complimented Noni on her hair. We also have British stars Aml Ameen, who plays Noni’s record company boss and singer Estelle.

Who doesn’t know who Danny Glover is right? Glover plays Captain David Nicol who just also happens to be Kaz’s father (Nate Parker). Glover brings the much needed voice of reason and gentle touch to this film and his role, and only wants the best for his son, he could also be seen as a pushy parent but he brings that air of kindness, the complete opposite to Minnie Driver’s character.

American Hip Hop artist, Machine Gun Kelly who is currently signed to Bad Boy and Interscope records, plays Noni’s love interest at the beginning of the film. We say love interest; it’s more of a fake, set up by the record company, relationship. In front of the camera’s he’s a complete idiot with the ego the size of Mount Everest, but behind the scenes he’s quite a sweet guy. 9. Beyond the Lights has been nominated for a number of awards.

Since its release onto the big screen the film, cast and soundtrack have been nominated for a number of awards one of which Gugu won for Capri Hollywood best actress award. It’s also seen Rita Ora’s song Grateful be nominated for Best Original Song at the Academy Awards.

10. A deep look at women in the music industry

Even thought Beyond the Lights is a work of fiction, it does question the integrity of the Music Industry when it comes to the treatment of our female superstars, who are hardly ever viewed as the exceptional talent they are but rather how sexy they can make them look and sound in order to make as much money as they possibly can. To all those young girls out there who want to be the next Beyonce or Rhianna, please watch this film, it could give you a very good insight into how you would really be treated. So, there you have it, our 10 reasons to watch Beyond the Lights. We can rave on about this film enough, it’s surprisingly intriguing, heartfelt, gritty, raw and most importantly entertaining.