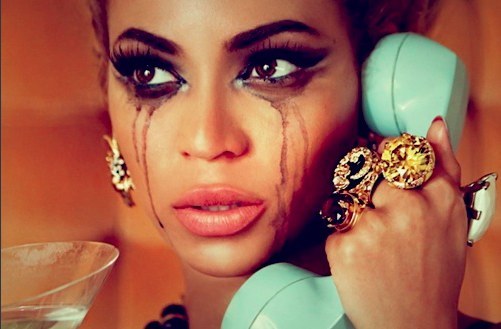 Holding up our publicly acceptable façade is not easy, there are many parts to our daily routine and contrary to popular belief, we did not ‘wake up like this.’

Not only are we at risk of impalement from bra underwires, we also  subject ourselves to tweezing, plucking, threading and waxing; something that can only be described as a form of self torture, that we occasionally like to pay for.

Below, are some other mild irritations of being the produce of an XX chromosome…

1. Hair sticking to your lipstick Unless you regularly rock the ‘Croydon facelift and bun’ combination, you have probably been subjected to wind induced dignity loss at least once in your life.

Not only are things like blindness and mass hair consumption a possibility when it’s thrashing across your face; it’s also extremely annoying when it continually sticks to your carefully applied lipstick, in preparation of bumping into fit Dan from next door. It’s a cruel world when you’re forsaken by something, that you spend so much time and money on.

2. The Mascara giveth and the Mascara taketh away There is no pain like stabbing yourself in the eye with a mascara wand, and nothing more an annoying than a constantly weeping eye that will no longer accept the fruits of your make-up applying labour. 12 times a year our bodies violently rip down the walls of our uteri and flood our brains with more hormones than collectively present in an episode of Loose Women.

Whoever said “hell hath no fury like a woman scorned,” never met a woman with PMS. The most frightening thing is that women who spend a lot of time together sync up. So if you’re the only man in the office, make like Mo Farah and find a bomb shelter with wifi; it will be like a scene from 28 days later out there.

There are many irritating factors in life; wind is a reoccurring one. There痴 nothing like clipping in your finest weave, only for a down draft on the tube escalator to blast your hair forward like a (baby era) Justin Bieber haircut, revealing rows upon rows of carefully buried Dirty Looks extensions.

This often follows a half ditched attempt to re-conceal them, before deciding you cannot be bothered and donning your finest “fuck my life” face.

If you are single at any point from your mid twenties, you instantly fall into the Bridget Jones category. People think we only eat food out of pots, drink Pinot from the bottle and sing ‘it’s raining men’ to our cats; this is not wholly true, because we also order a lot of pizza, which does not come in pots. Occasionally in life, you step outside the barriers of your comfort zone and get a bit handy with the old liquid eyeliner. When this happens, you have two choices; either you admit defeat and remove said eyeliner, or you continue to build it up on both sides until eventually, you resemble Antonio Banderas in the Mask of Zorro.

Either way, you will be filled with unfathomable self-loathing for the remainder of the day.

No matter how much of a heel wearing veteran you believe yourself to be, there is a universal fear amongst women, otherwise known as the ‘cobble.’

An adverse effect of harsh heel wearing terrain, is the wobble. Something we then prolifically make excuses for: I’ve only had 1(0) wines, I’m not drunk, I can walk in heels,  I have a rare ankle condition, I injured myself in year 6… Where do they go? Who knows…

You could buy 20,000 and still be left with only 4 in less than a month. The ones which you have cunningly unearthed are usually missing the plastic ends, meaning you have an involuntary haircut with every use. That awkward moment when you walk around naked for 3 hours smelling like a mixture of talcum powder and cat pee in order to be a ‘bronzed latino goddess,’ – only to find you look like an overcooked roast chicken. Left hand, perfectly manicured. Right hand, looks like you’ve tried to paint it with your foot. This is made worse, by trying to be fancy ahead of the festive season and using glittery nail polish.

Glittery nail polish could survive in a nuclear war zone and I’d be lying if I said I hadn’t ever considered a hack saw to be a viable method of removal.