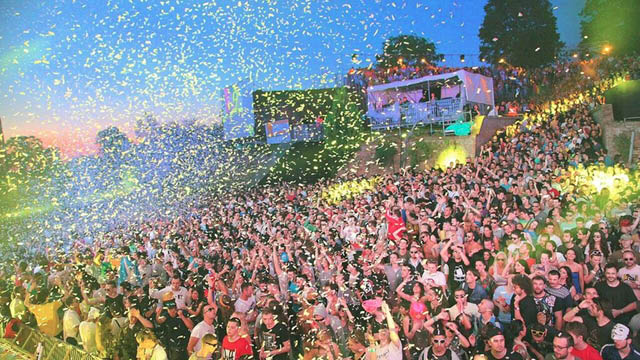 With festival season just around the corner and such an excitingly diverse array of festivals to choose from, audiences are after more than just a fantastic musical line up.

More than ever, many are choosing to venture overseas, combining their favourite holiday destinations with some of the most exciting events, providing the ultimate music and cultural fix. From mountain top snow resorts, sun-kissed Croatian festivals and exotic Moroccan locations, to wallet friendly Eastern European hotspots, there is something for everyone to enjoy, the choice is yours! The incredible Soundwave has just revealed its lineup for this summer in Croatia, with a brilliantly diverse range of acts including Pharoahe Monch, Calibre, Mala, Craig Charles, Fatima & The Eglo Band live, Gentleman’s Dub Club, Channel One Sound System, Riot Jazz, Romare, Harleighblu and many more.

Soundwave takes place in the beautiful and enchanting Garden Tisno, a mesmerising piece of paradise hidden along the Dalmatian coastline. Sound-tracked by the some of the world’s finest exponents of broken beat, reggae, afro to acid jazz, hip-hop, soul, funk, drum and bass and more, the festival is a harmonious and beatific odyssey which seamlessly merges a sublime holiday and musical escape like no other. Snowbombing – the world’s no.1 music festival on snow – is once again inviting Snowbombing fans to embark on one of the greatest two-day road trips across Europe, final destination: Snowbombing 2016, Mayrhofen, Austria.

Welcoming over 500 car-noisseurs, this year’s MAD MAX theme invites all rockers, rollers, Acolytes and Nightriders to don their leathers, studs, piercings and ripped denim as they plunge into the maximum mayhem of Snowbombing’s Mad Mission to the Mountains! Hideout Festival is moments away from selling out for the sixth year running as they announce twenty new artists including The Martinez Brothers, Joris Voorn, John Talabot, Alan Fitzpatrick and more to play alongside Jamie xx, Skepta, MK and J.E.S.u.S. 2016 will once again see thousands of revellers descend on the idyllic Zrce Beach in Croatia to experience a line up of over 100 artists encompassing the full spectrum of electronic music. For more info visit the Hideout website.

Launched in 2003, the concept of Caprices Festival was to bring people and artists together in a dreamlike location in the Swiss Alps: Crans-Montana ski station. Now in it’s 13th year, the festival has gained a reputation for outstanding electronic lineups, an operational excellence, a creative mindset and one of the finest mountain line of the Alps. With a line up of the biggest names in techno including Ricardo Villalobos, Nina Kraviz, Maceo Plex and Jamie Jones, Caprices is set to be an unmissable party.

Set against the breath-taking backdrop of the Kobetamendi Hill in culture-rich Bilbao, Bilbao BBK Live welcomes 40,000 revellers to enjoy an unparalleled musical lineup combining the biggest names with fresh talent. Joining the lineup for 1 of only 2 European shows are Canada’s Arcade Fire as well as alt-rock legends Pixies, Tame Impala, Foals, M83, Hot Chip, Years & Years, Father John Misty, Courtney Barnett and Wolf Alice for a festival that promises to be one of their best and biggest yet! Making its debut on June 29th, Love International’s ethos might already feel a little familiar, curated by Dave Harvey and Tom Paine who have many years of experience working with The Garden Festival’s crew and shaping its artist bookings. Now they are realising their full vision, bringing back some old friends who have graced Tisno over the years and also introducing many of the world’s most revered DJs and producers for the first time to Tisno.

Five of the just revealed names are all amazing artists in their own right, each bringing something different to Love International. Eats Everything is quite simply one of the world’s biggest DJs and for the last three years he has blown Tisno away; for pure electric party vibes it doesn’t get any better. Bicep had a huge 2015 and the duo are all set to make this year even bigger, sculpting sublime sets across disco, house and techno, whilst Jackmaster played arguably one of the defining sets of last year with Armand Van Helden, their Boiler Room show skipping between French touch to garage and everything good inbetween. Roman Flugel is a Teutonic legend from the early 1990s crossing ambient, house, techno, electro and leftfield, and prime Swedish export Axel Boman is a bit of a young legend already; his Studio Barnhus label is a source of great material, and he has released and remixed on Permanent Vacation, Moodmusic and Hypercolour. The guys are joined by the already announced Dixon, Motor City Drum Ensemble, Ben UFO, Gerd Janson, Craig Richards, Joy Orbison, Midland, Horse Meat Disco, Prosumer, Hunee and Job Jobse.

Set in a magnificent natural amphitheatre with gently rolling hills leading down to a private bay, a shimmering sandy beach and crystal clear waters, Electric Elephant offers the perfect fusion of holiday and festival. For five days, the picturesque Garden Tisno site is taken over by many of the the leading names in House, Disco and Electronica, playing across three stages, daily boat parties and the much-loved open-air club Barbarella’s. Acts taking to the decks for EE16 include Âme, Andrew Weatherall, Bicep, Boo Williams, Greg Wilson, Kerri Chandler, Laura Jones, Jacques Renault, Psychemagik, Steffi and Todd Terry. Wiz Khalifa is set to headline Fresh Island 2016 with further performances confirmed from Ty Dolla $ign. Statik Selektah, DJ Premier, Logan Sama, Shakka and Tim Westwood, with many more still to be announced. Fresh Island is pulling out all the stops this year to make its fifth anniversary  the biggest and most memorable yet. Returning to the stunning location of Croatia’s Zrce Beach, revellers will experience unmissable performances across hip-hop, grime and r&b along with boat and pool parties galore.

Started as a student protest fighting for political change and freedom, EXIT continues to spread positive vibes in the Petrovaradin Fortress in Novi Sad. With a host of different stages connected by cobbled streets, ramparts and tunnels, EXIT welcomes you to enjoy artists from a diverse mix of musical genres. Just a short ride away from the Serbian capital Belgrade, this beautiful medieval fortress provides the perfect backdrop to enjoy the likes of hip hop hero Wiz Khalifa, pop superstar Ellie Goulding, much loved indie rockers Bastille as well as some of the biggest names in the electronic music such as Dimitri Vegas & Like Mike, Solomun, Nicky Romero & James Zabeila. EXIT. Where hedonism meets activism.

Taking place in the picturesque coastal town of Salacgriva in Latvia, Positivus is gearing up to celebrate it’s 10th anniversary in 2016. Positivus transports chart-topping headliners, underground emerging talent and exciting art and dance stages to their unspoiled atmospheric coastal setting amid stunning woodland. Festival goers can dip their toes in the baltic sea or take in the atmosphere in a hammock beneath the trees as well as enjoying artists such as Ellie Goulding Wolf Alice, Seinabo Sey, Richard Hawley, John Newman, C Duncan, Mercury Rev and San Fermin.

Fresh from the success of its 10th anniversary edition in 2015, OFF Festival returns with another bold and eclectic lineup. With everything from the vital hip hop of Flatbush Zombies and grindcore legends Napalm Death through to much lauded producer Machinedrum and Philadelphia punks Beach Slang, OFF is truly a festival for the discerning music fan and the place to discover the best alternative acts from around the world. Staying true to itself and flying in the face of current trends the organisers and crowd have one serious finger on the pulse when it comes to music.

Having just landed themselves the award for ‘Best European Lineup’ at this year’s European festival awards and having picked up the ‘Best European Festival’ award in 2015, this is certain to be another standout year for Sziget festival. Situated on the picturesque Óbuda Island, in Budapest, this is the go-to cultural event for arts and music lovers for the the ultimate festival-holiday experience. For their 24th edition the festival will see the likes of Bastille, Bloc Party, Chvrches, Bring Me The Horizon, MØ and Sum 41 take to the stage. The festival invites everyone to express themselves on their self-proclaimed Island of Freedom.

Oasis brought a unique new festival experience to Morocco in 2015 with its debut event at the Fellah hotel in Marrakech. Soundtracked by the ultimate blend of house, techno, disco and electronica, the sizzling Moroccan sun ensures a laid-back festival vibe by day as guests cool off in the pool, unwind with daily yoga and massage, enjoy authentic local street food, and revel in the spectacular views of the nearby Atlas Mountains. As night falls, the dancefloor brings the heat, as the finest DJs and live acts perform under captivating star-lit skies.

Amsterdam’s thriving club and nightlife scene is well documented and for 5 days a year the city becomes the centre of the electronic music world as over 375,000 visitors flock to the city for the Amsterdam Dance Event – the ultimate music event for fans of electronic music. Taking place from 19-23 October, the festival features more than 2,200 international artists performing in more than 100 of Amsterdam’s most celebrated venues including Melkweg, Closure, Gashouder, the NDSM Docklands and De School.