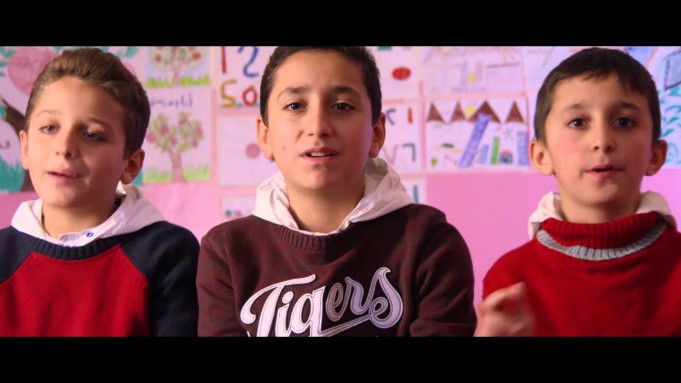 Rap music, as we all know, is all about telling a story.

“We used to run when we were crossing the street so they (Snipers) wouldn’t hit us.” These are the words of Abdulrahman, aged 12, describing his everyday life in war-torn Syria. How’s that for a story?

We invite you to meet three young brothers who arrived in Lebanon as refugees four years ago. Despite the trauma they’ve survived, these talented kids are now bringing their story to the world in the form of beats and rhymes.

The new film ‘Straight Outta Syria’ by Silverfish Productions, follows three talented young brothers, Samir, Abdulrahman and Mohammed who arrived in Lebanon as refugees four years ago. The film explores their story and talent for rap music. It illustrates that if they had not been able to return to school, learn how to read and write, they would not have learnt their music and developed their talent.

The #UpForSchool campaign, warns that a lack of funds could leave one million vulnerable Syrian children, living as refugees in Jordan, Turkey and Lebanon, out of school and at risk of child labour, early marriage, exploitation and extremism.

The petition has been launched ahead of a crucial international Syria pledging conference in London on 4 February. World leaders will meet to secure the $750 million USD to secure school places for 1 million Syrian refugees across Lebanon, Jordan and Turkey. The plan to educate 1 million Syrian refugee children in the region aims to offer primary and secondary education through innovative programmes such as double-shift schooling.

Sarah Brown, President of Theirworld, the charity that founded the #UpForSchool campaign, said: “This film poignantly tells the story of three brothers, who despite their circumstances have been able to develop their passion for rap music, because they have returned to the classroom. However, there is a generation of young talent from Syria, who will not be able to fulfil their potential, because they are currently denied an education.

We must challenge world leaders to play a part in giving the most vulnerable children in the world a life they deserve. By investing in their education we are providing hope for Syria’s Young Talent, and avoiding greater problems in the future.”

The film, ‘Straight Outta Syria ’ hopes to create a groundswell of support for the petition that will be presented to world leaders attending the conference hosted by leaders of United Kingdom, Germany, Norway, Kuwait and the United Nations.