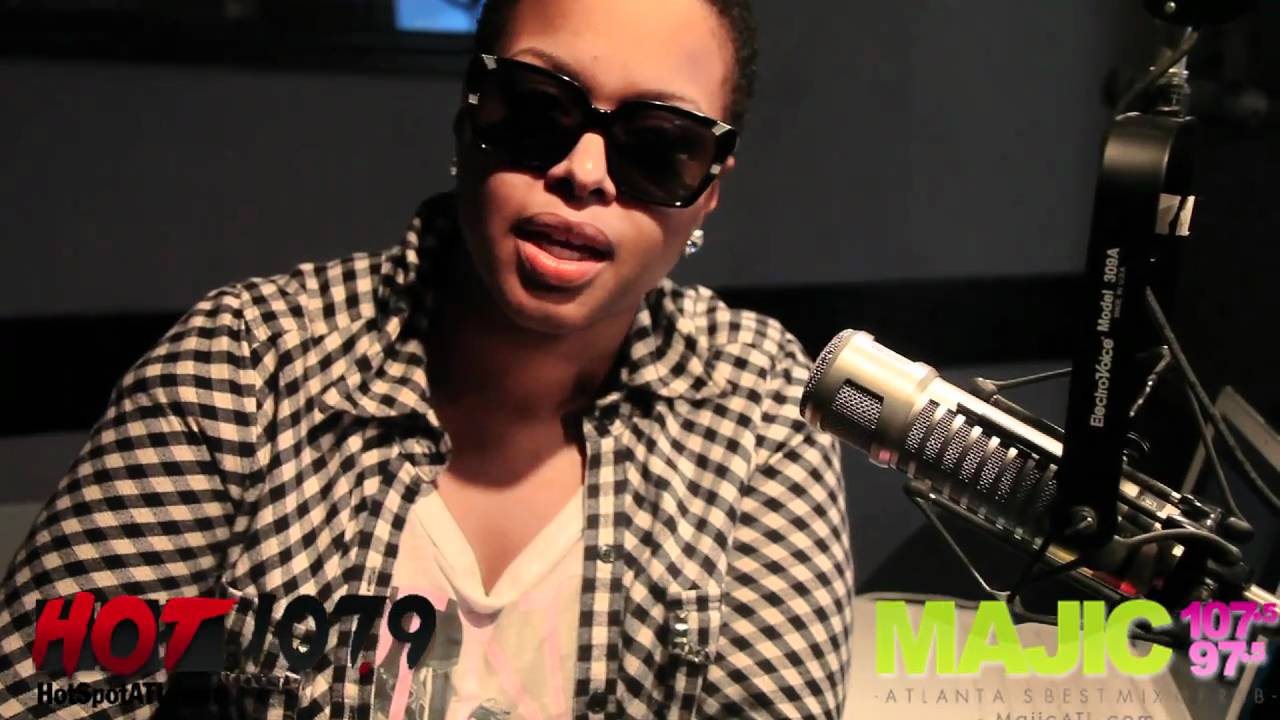 It’s interesting as I begin writing this recap of this year’s Soul Train Awards, because prior to the actual performances of the evening, on the big screen hovering over the stage, was playing vintage rare footage from the early 70s of Soul Train episodes with legendary host Don Cornelius interviewing a number of also legendary performers including James Brown, and Marvin Gaye.

What struck me as interesting was that as I typed “2010 Soul Train…” I remember watching this montage and zooming in time from the afros and bellbottoms of those classic episodes straight into the 21st century future where AutoTune and syncopated dance routines have replaced the old-school/classic performances and the famous Soul Train Line. But, funny enough, there was still plenty of soul represented that night, which actually blended the past and the future quite well…but let me not get ahead of myself. Let’s start with the red carpet.

Not so much “red” but actually purple (lavender, even) to go with the pastel shades of Centric TV’s logo. The stream of celebs to start filling in the Media Area should have begun around 6pm, but didn’t actually kick off till closer to 7pm. I was sandwiched between presenters from Billboard Magazine and CNN, with BET News also in my area, which was great because they had first draw of anyone who came down the path and as I was right in between them; incidentally Flavour Magazine was the ONLY UK-based media represented at the Soul Train Awards! I had some of the closest shots of any photographer. I mean the “they-literally-could-steam-my-camera-lens-with-their-breathing” kind of close shots lol Soul Train, in its tradition, had dancers on either side of the carpet runway to make for an energetic Soul Train Line as the celebs started to slowly parade down the path and into the Media Area. To test my camera out, I did use a couple test shots on the beautiful April Woodard who is a news presenter for BET Nightly News and also co-hosted with Sway (MTV) for President Obama’s recent town hall meeting that was aired simultaneously on BET, MTV, and CMT. After that, you could hear singing, and down the carpet came El DeBarge and Faith Evans singing a duet as they kicked off the pre-show festivities. From there, went on a conga line of stars parading past my lens (some of whom I missed as it was jammed with more stars than actual journalists to cover them) that included the night’s co-presenters, Taraji P. Henson and Terrence Howard (both co-stars of “Hustle and Flow”), Ginuwine and his wife Sole’, Chilli (of TLC) with her new boyfriend, Tamia (who has put on a few pounds over the years but seemingly in all the right places, in my humble opinion lol), former Cosby Show child stars and now grown actresses Raven Simone and Keshia Knight Pulliam, R&B singer Tank, reality show star/singer Ray J, BET CEO/President Debra Lee, Rick Ross, Melanie Fiona, Ne-Yo, Keyshia Cole, Bruno Mars, Biz Markie, DJ Kid Capri, Just Blaze, Janelle Monae, Erykah Badu, Anita Baker (accepting a Lifetime Achievement Award), Dionne Farris, Chrissette Michelle, Jazmine Sullivan, Freddie Jackson, Peabo Bryson, Jeffrey Osborne, Rachelle Ferrell, Kem, Lalah Hathaway, Jessie Boykins III, Jesse Jackson, Eric Benet, Bilal, Steve Harvey, R. Kelly, Chante Moore, Doug E. Fresh, CNN’s The Situation Room, Wolf Blitzer, Gyptian, Cee-Lo Green, SWV… I mean…whoa!, I could really go on but I think you get that there were MANY!

Finally making my way to my seat, the show starts and R. Kelly appears, in spotlight looking like Black Phantom of the Opera, right in the box seats just below me to the right. Wait! No, now it’s R. Kelly in the box seats further below to my left. Nope! Now it’s R. Kelly (the real one, this time) onstage and removes his hat, mask and cape and begins singing a medley of his hits that everyone begins to sing along to. Then, out of nowhere, he begins singing this Grease/Glee-styled track and suddenly about 100 teenaged kids come running onto and up to the stage and start dancing around him. After all his many legal issues with and accusations of being a paedophile…I mean…really? There were amazing performances from artists like Erykah Badu, who sat in the dark onstage on a large white sheet that once illuminated, transformed her and that area into something you might see in Tron: Legacy (seriously), while she sang a beautiful jazzy intro before going into Window Seat. It’s hard to describe how amazing it looked until you see for yourself! Cee-lo did the much expected and anticipated “F**k You”, although he alternated with “Forget You” (not as funny as the original), but came on stage with a grand entrance, dancing cabaret girls, chandeliers and piano, and himself decked out in a golden robe that would have made him the perfect extra in ‘Austin Power: Goldmember’. Oh, and he literally glided down the runway lol. A clean performance until he hilariously kept walking around the stage after his song was over, strutting with swag, and then saying a few words that I’m sure gave the censors something to edit! Honorable mentions go to Gyptian who brought a taste of Jamaica to the Dirty South, and also props to Ne-Yo, although as a good performance he put on, it was so much strikingly Michael Jacksonesque that it really could have been a tribute to him (i.e. we need something new, Ne-Yo).

Okay, I should probably mention some of the awards given out, right? Well, as this is a taped show, there was little by way of taped awards and more about performance content, since they will mention winners in other categories that weren’t filmed during the actual broadcast. For those who were featured (and it’s already been written about by now so no spoiler), they included Bruno Mars & B.o.B for Song of the Year, Melanie Fiona for Best New Artist, Janelle Monae picked up the Centric Award, and Best Reggae Artist went to Gypitan, who’s speech was so confusing, I pondered whether it would be wise to include subtitles when they televise the show. It wasn’t the pas tois that messed me up (as it probably did for most of the non-Caribbean/Southerner Americans present) but that if James Brown was Jamaican, Gyptian is probably who he’d speak like (all love, though) The honorary awards were reserved this year for two music legends: Anita Baker and Ronald Isley. Ladies first. Anita Baker is arguably one of the best there is, and although she mainly dominated the 90s (being absent the last decade), her influence has remained undiminished. Paying tribute in song to her were an amazingly stellar line up of Chrissette Michelle, Faith Evans, Tamia, Goapele & Dionne Farris, Rachelle Ferrell & Kem, and Lalah Hathaway, before Anita took the stage to accept her Lifetime Achievement award and address the standing ovation she received.  Many remained standing till she finished speaking and went offstage, and then El DeBarge came on to sing for her but she ran back on stage and danced with him as he serenaded her to the point of her giggling girlishly (great fun)!

Ronald Isley, of the legendary Isley Brothers, was paid tribute to by two groups of singers. ‘Group 1’ consisted of Keyshia Cole, Eric Benet, Bilal, El DeBarge, and Tank, followed by a power old school trio of ‘Group 2′ consisting of Freddie Jackson, Jeffrey Osborne, and Peabo Bryson. He then accepts his award and somehow gets the crowd reacting like they were in church with an emotional acceptance speech filled with “amens” and such (had me wondering if this had to do with Centric’s recent airing of “Unsung: Angela Winbush” episode that put him in an unflattering light?)…no further comment. Either way, he gets the crowd hyped (once the sound man could see Ron looked like he was going to hit him with his cane if they didn’t fix the scratching feedback in the monitors lol) with his classic, “Between the Sheets” and then went through a medley of hits before ending with Cee-lo (and then the rest of the tribute singers) with his 60s classic, “Shout”.

Now, I realize this is a lot of detail, especially for those of you who have made it this far and weren’t scared off by the potential spoilers ;o) Flavour Magazine gives you the inside scoop! I mean, I didn’t even go into (Potential Spoiler Alert–>>>) the magic tricks Terrence and Taraji’s performed throughout the show (I’m serious), or even their dance battle with Terrence’s crew vs. Taraji’s crew (you HAVE to see it). I didn’t mention that Wolf Blitzer of CNN being taught how to Dougie by Doug E. Fresh (another MUST SEE), or that he accepted an award on Eminem’s behalf (just before wrestling with Biz Markie) because it made “sense that HE should accept it” lol Or even Biz Markie getting the audience to sing his classic, “Just a Friend” while he beat-boxed for them…I mean…that wasn’t much of a spoiler, was it? lol

Overall, a great night for some great performances, star power, fashion, parties, and music! This is your boy Ahmed reppin’ for Flavour Magazine in the States, wishing you LOVE, PEACE, and SOOOOOOUL!!!

The Soul Train Awards airs in the U.S. 28 November on Centric and BET. The show can also be watched online via BET.com following the broadcast.

Words and photography by Ahmed Sirour.

More photos and videos below: