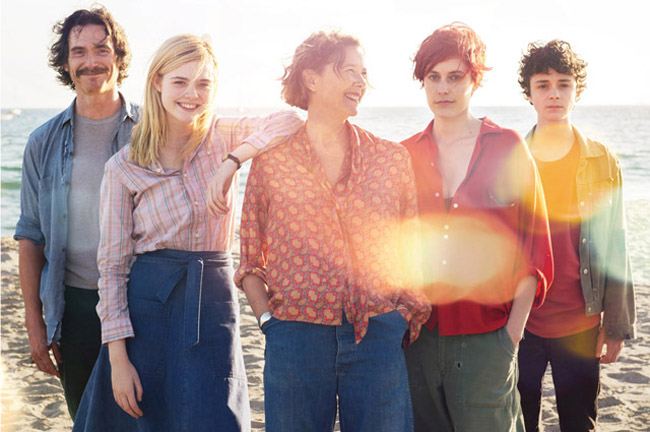 Growing older is inevitable.  But in the 1970s, 60 was a long way from being the new 40, as Annette Bening discovers in 20th Century Women.

Don’t be fooled by that epic-sounding title.  20th Century Women, the latest from writer/director Mike Mills, is anything but sweeping, offering up the story of three women in a crumbling South Californian house finding their respective ways through life.

This is only Mills’ third film in fourteen years.  Beginners (2010) was based on his relationship with his father, who came out as gay in later life.  It won Christopher Plummer a Best Supporting Actor Oscar.  Now his drawing on memories of his mother, using her as the basis for the older of the three women, played by Annette Bening.  Until recently, she was heavily tipped as a contender for the Best Actress trophy – but the Academy had other ideas.  However, Mills himself has received a nomination, for Best Original Screenplay.

Bening’s Dorothea is the pivotal member of the female trio and the oldest.  In her mid-50s, she’s the single mother to teenager Jamie (Lucas Jade Zumann).  She’s landlady to Abbie (Greta Gerwig), a flame-haired photographer in her mid-20s, and unofficial landlady to Julie (Elle Fanning), Jamie’s lifelong platonic friend who often spends the night in his room.  It’s the tail end of the 1970s.  Jimmy Carter is the President, skateboarding and punk are the latest crazes and teenagers chain smoke.  So do the adults, Dorothea in particular: perhaps that’s because, as Jamie puts it, “she’s from The Depression.”  Loosely translated, it means she’s tough.

It also means she’s older than everybody else around her at a time when being in your late 50s meant being de facto old.  And Bening allows herself to look her age, with little or no make-up and greying hair.  When she does indulge in some powder and lippy, it’s heavy-handed and artificial, rather than enhancing her features.  She’s conscious of her age, reminding herself that she’s now at the stage where she’s either ignored or if she shows a man she’s interested in him, she runs the risk of him being repulsed by the idea.

The film is a riff on a coming of age story, with them all maturing and learning important life lessons.  Dorothea believes son Jamie needs other people to guide him because she can only ever see him as her son and not an actual person.  Entrusting him to Abbie means he’s fed feminist propaganda, as well as learning about sex in graphic detail.  Not quite what his mother had in mind.  Platonic friend Julie has a bad reputation for sleeping around and caring little about it, so her influence could be damaging.  Except she refuses point blank to sleep with him because she cares too much for him.  It doesn’t help his raging hormones.

While Mills has given us an affectionate portrait of growing older – NB: not growing old – and is disciplined about the number of characters, he’s less in control of the story itself and the result is rambling and untidy.  You could argue it reflects the lives of the people on the screen, but it’s more likely to be the result of basing the film on memories, which aren’t known for their reliability.  Despite a luminous performance from Bening, there’s the distinct impression that Dorothea has been toned down and chances are she was more eccentric than what we see here.

20th Century Women is billed as a comedy, but don’t expect to be rolling in the aisles. The laughs are gentle, often coming from the characters’ own failings, but that’s about as far as it goes.  So while it’s thoughtful and gentle, there simply isn’t enough for a wholly satisfying watch.

20th Century Women is in cinemas from Friday, 10 February.