This week we celebrate the Moors, the indigenous people from North Africa who conquered and ruled over Spain for over 700 years in 7011AD.They resided in Al Andalus, Spain and brought with them a mixture of African and Islamic influences which can be seen throughout Spain’s most prominent tourist attractions today. 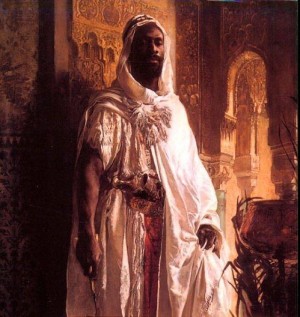 ue of Cordoba which is now a Cathedral called ‘Diocese of Cordoba’ was known to be the heart of the city. It was described as ‘so beautiful and dazzling that it defined any description’.  It held great importance amongst the people as the mosque served as a central hall for teaching and discussing law and order in Al Andalus. The palaces, mosques and castles provide great evidence of the Moors standard for artistic architecture.

After the Islamic’s empire was over-thrown the Moors left Spain with over 113,000 houses for their citizens, 700 mosques and 300 public baths throughout the city of Al Andalus. This doesn’t even include the streets that were paved and lit; houses that had hot-air ducts under the mosaic floors for winter and marble balconies during the summer.

The Moors also brought with them pomegranates, oranges, lemons, coriander, bananas, sugar-cane, cotton, rice and paper. Paper was an unknown to the west, but during the Moors legacy they left Spain with bookshops and over seventy libraries. Now that’s something to write about during BHM.