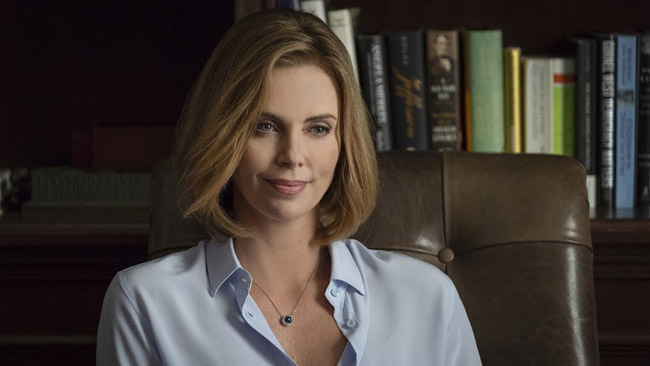 There’s nothing more inspiring than seeing impressive female characters running the world on screen. In the upcoming comedy Long Shot, released on Friday, Charlize Theron stars as Charlotte Field, one of the most influential women in the world.  Smart, sophisticated, and accomplished, she’s a powerhouse diplomat with a talent for…well, mostly everything.

To celebrate the release of Long Shot and in celebration of Charlotte Field, we’re taking a look at five of the most badass female characters ever to grace the big screen. In Long Shot, Charlize Theron stars as Charlotte Field, the US Secretary of State and 2020 presidential hopeful. She’s incredibly talented, elegant and intelligent, with a flair for diplomacy and a natural talent for politics. Fred Flarsky (Seth Rogen) is a gifted and free-spirited journalist with a self-destructive streak. The two have nothing in common, except that she was his baby sitter and first crush. As Charlotte prepares to run for the presidency in 2020, she takes a chance and hires Fred as her new speech writer. Despite their differences, sparks fly as their unmistakable chemistry leads to a round-the-world romance that becomes embroiled in a series of dangerous and outlandish incidents.

Miranda Priestly (Meryl Streep) is the most powerful woman in fashion. She is the editor in chief of Runway magazine and is notoriously one of the most intimidating women in the industry. Miranda is the most iconic example of a Boss Lady in pop culture (and is supposedly somewhat based on Anna Wintour). Although she seems scary at the beginning, she’s actually just doing everything she can to create the best magazine possible. She’s fierce, confident, and fabulous, and that’s why we love her. Erin Brockovich (Julia Roberts) is a single mother who uses her wits to get a job in a law firm. At first, she is looked down on by her co-workers, because of her clothes and casual attitude. When she starts investigating a health violation, she unknowingly gets involved in one of the largest class action lawsuits in American history. Erin’s determination and hard work is unlike anyone else in the firm, and she truly earns the respect of her peers. This film shows how hard work pays off, no matter what your background is – and even better, it’s based on a true story. Elle Woods (Reese Witherspoon) might’ve followed her ex-boyfriend to Harvard Law school so that they could get back together, but once she was there, she realized how much she could accomplish. All of her peers doubt her and make fun of her in class, but Elle stays determined and works hard to become a good lawyer. When she gets assigned to work on a murder trial, Elle uses her fashion and beauty skills to her advantage, winning the team the case. Legally Blonde teaches us how important it is to be yourself, even when others doubt you.

Katherine Johnson (Taraji P. Henson) is one of the three female mathematicians that was behind one of the United States’ largest achievements: space exploration. She had to overcome gender, race, and professional barriers to be respected in her position. Katherine was able to fight against the adversity in order to prove her intelligence to the male-dominated team. Hidden Figures is based on an inspiring true story.

Long Shot is released in UK cinemas on Friday.