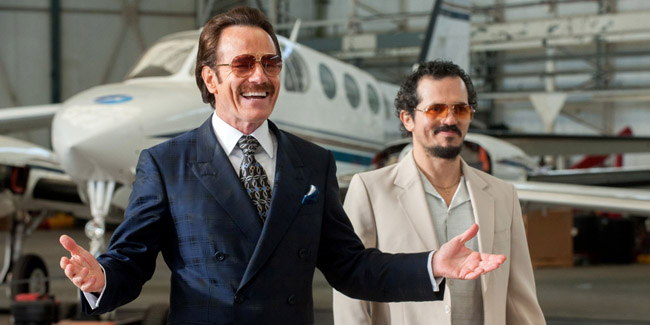 The Infiltrator is an adrenaline-fueled thriller, based on the true story on how a U.S. customs agent helped take down Pablo Escobar’s money-laundering organisation, starring Bryan Cranston as agent Robert Mazur.

Inspired by the film, we take a look at other remarkable true crime stories, which were adapted into films.

The Infiltrator is out on Digital Download now and on Blu-ray™ and DVD from January 23. One of the most famous gangster films of all time, Goodfellas is based on the true crime book Wiseguy by Nicholas Pileggi, charting the rise and fall of Henry Hill. Hill was a mobster between 1955 and 1980 and he even recorded a commentary for the film, alongside a former FBI agent. In this classic film from 1967, Warren Beatty and Faye Dunaway played real life bank robbers, Clyde Barrow and Bonnie Parker. One of the first films of the new Hollywood era, Bonnie & Clyde broke a stream of cinematic taboos at the time, so was a smash hit with a younger less conservative audience.

The Thin Blue Line is a documentary by Errol Morris about Randal Adams, a man sentenced to death for a crime he didn’t commit. Considered to be one of the greatest documentaries ever made, the film actually led to Adams’ case being reviewed and he was eventually released from prison a year after the film came out.

Catch Me If You Can Unlike the other films on this list featuring murders and drug dealers, Catch Me If You Can focuses on a different kind of crime – check fraud. Development for this film started in 1980, but took 22 years to come to the big screen, based on the autobiography by Frank Abagnale. Based on the book by Robert Mazur, a U.S. Customs special agent, who in the 1980s helped bust Pablo Escobar’s money-laundering organisation by going undercover as a corrupt businessman, The Infiltrator is a stylish thriller that looks into one of history’s most audacious stings. Mazur went deep undercover to infiltrate Pablo Escobar’s drug trafficking scene plaguing the nation in 1986 by posing as slick, money-laundering businessman Bob Musella. And now his story has been turned into The Infiltrator.