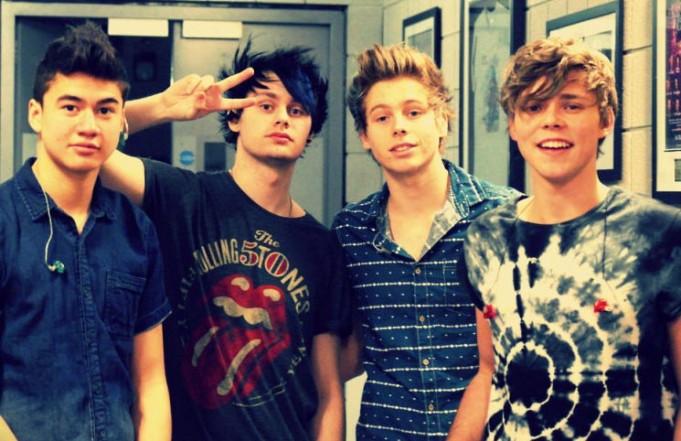 5 Seconds of Summer, also known as 5sos for short, are an Australian originated band who formed in Sydney back in 2011.

The band consists of 4 members: Ashton Irwin, who’s 20 years of age, known as the ‘talkative drummer’ with the sweetest of hearts; next up is Michael Clifford who will be 19 on November 20th, Mikey for short is known most for his forever changing hair colour, as well as his crazy personality; Calum Hood who is 18 years of age also, is reflected as the reserved and sweet player of the bass guitar; and finally the youngest member of them all, the main vocals and ‘heartthrob’ of the band, Luke Hemmings, who recently turned 18.

The group were originally based on Youtube and known as ‘Youtube celebrities’ due to their wide following. This is where they posted videos of themselves covering songs from a number of artists, one of many hit videos being their cover of Wheatus’ Teenage Dirtbag

This is how they rose to fame after a member of International pop stars, One Direction, came across the boys and invited them on their ‘Take Me Home’ arena tour after being impressed with what they saw. From there on, it has been non-stop for the band. In February 2014, they released “She Looks So Perfect” as their debut single worldwide. It topped the charts in Australia, New Zealand, Ireland and the United Kingdom. Their self-titled debut studio album was released in June 2014, which reached #1 in 11 countries and earlier this year they announced their 2015 international headline arena tour ‘Rock Out with your Socks Out’ which sold out dates within minutes – http://www.ticketmaster.co.uk/5-Seconds-of-Summer-tickets/artist/1778118.

Personally I believe 5 Seconds of Summer have totally shaken up the world of music. A young band, bringing back the live music aspect with the added talent of playing instruments. Spectacular right? And not only that, but also throwing in a completely new sound (pop punk, however more pop), completely erasing the current mainstream sound from your ear drums and having you tapping your foot to the beat of the rocky band.

The band are remarkable individuals, just to put the cherry on top of the cake. Each personality complimenting another, however like with every band before them and those who’ll come after, you’ve definitely got a favourite. Whether you refuse to admit it or not, you’ll always warm to one member more than another. In the band, I truly couldn’t deny that each lad brings a trait which particularly appeals to every individual, which makes them even more likeable. Over all leading me on to advise…

They have a crazy amount of energy

And completely out of this world senses of humour

Their talent hits the roof