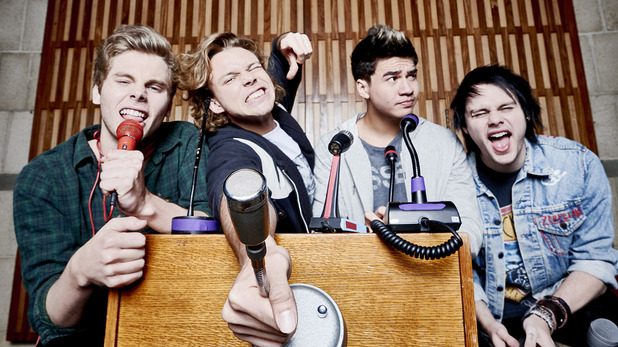 After stringing their fans along for the past few months, knowing full well that the album had been completed earlier this year, only time could tell when the Aussie bunch would be releasing a taster of their ‘new sound’, which Drummer Ashton Irwin is calling ‘The Broken Scene’.

It feels as though we have been waiting forever for a new track but as of this morning “She’s Kinda Hot” has been getting its first radio plays all over the world and in addition to all of this is available on Spotify much to the delight of their fans.

To throw a little spanner to the works, bassist Calum Hood has spoken on the single and claimed the new title to be ‘misleading’ and has further gone on to say ‘It has a deeper meaning inside the song, it’s a revolution for outcasts’.

The track itself is extremely catchy and being referred to as a “mischievous riot anthem” that just screams 5SOS through the addition of the trademarked instrumental solos which sets up a strong feel for their forthcoming studio album, which we expect to hit stores later this year.

So what’s your thoughts on the brand new single? Do you approve of their new direction? Does “She’s Kinda Hot” sound like a new smash hit? Let us know.

You can listen to 5 Seconds of Summer’s new single below.

It’s a big thumbs up from us.