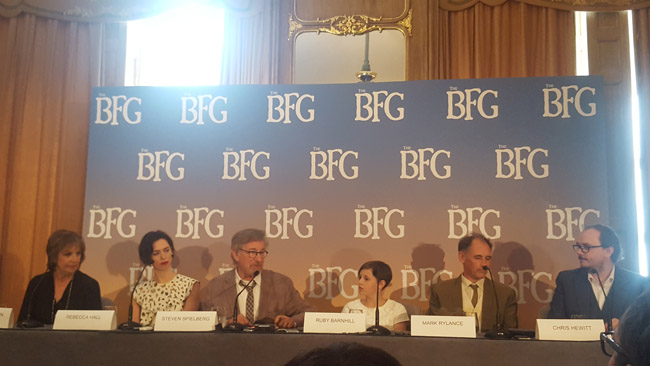 Saturday, July 16th saw the cast of Mark Rylance, Ruby Barnhill, Penelope Wilton and Rebecca Hall along with legendary director of The BFG take part in a press conference in a hotel in central London.

The cast and director who were in town for yesterday’s premiere of one the summers’ biggest movies, The BFG, in Leicester Square ahead of its release on July 22nd. Here are five things we learned from the press conference. Ruby Barnhill who plays the young Sophie hadn’t actually read the book until she was auditioning for her part. Spielberg became acquainted with the book when he read it to his young children, at the time making it into a movie never crossed his mind. It was more of an avenue to become closer to his family.

The most important advice Spielberg relayed onto Ruby was how concentration was important as she was very excited at times on the set and for to be able to get into character wholeheartedly to be able to portray how the character is feeling. Spielberg conveyed he knew Mark Rylance was the right person to play The BFG while they were filming Bridge of Spies, he got that intuition he usually gets when casting and thought there is no one better in the world who could play The BFG.

Mark loves working with Spielberg because he makes the actors feel comfortable. No one worries about making mistakes he encourages. Penelope Wilton agreed, saying Spielberg makes you feel free and open which makes you want to do your best.