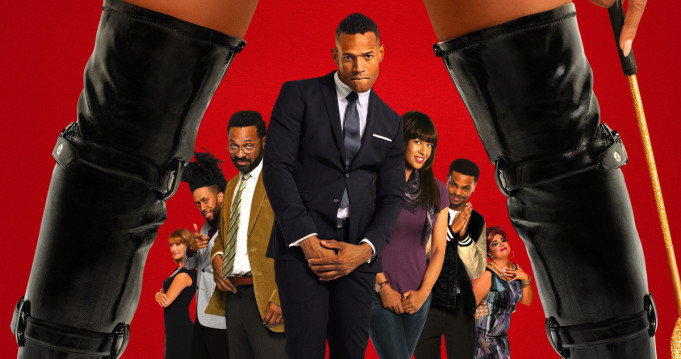 King of the parody, Marlon Wayans is back with his take on 50 Shades of Grey, 50 Shades of Black. Famed for his work with the Scary Movie franchise and White Chicks, you would expect a whole lot of silly foolishness from his script for this send-up. That’s exactly what you get but lacking is his ability to really make the audience laugh. 50 Shades of Black has everything you would expect from Wayans in pushing the boundaries, especially on the issue of racism in the form of Christian Blacks adoptive mother Jane Seymour. Although she has adopted two black sons and a Korean Daughter she is full of racist slurs and bigotry and doesn’t even realise there is anything wrong in her own attitude, but there is no malice behind it. Stereotypes are ripe throughout too, from his extremely well endowed sexually rampant brother Eli (Affion Crockett) to larger than life and equally sexual deviant Katesha (Jenny Zegrino). When these pair hook up there isn’t a scene safe from them popping up and getting down and dirty in front of everyone.

Taking on the role of Christian Black, Wayans take on Christian Grey couldn’t be further away from the original. Wealthy he may be but he lacks in so many other areas, like being an extremely bad lover with a tiny penis to match. The one thing about Wayans Black that will have Gay men and woman rejoicing is the hard work Wayans has obviously been putting in at the gym. At any opportunity, he likes to get semi-naked and he has a body so hard just the sight of it will knock you out. We are even given a Male Stripper scene where he seems to channel Channing Tatum in Magic Mike and gives us all a little butt dance. Hannah Steele, played by Kali Hawk seems to outrank Wayans on every opportunity and even though Christian Black is supposed to be the dominant, Steele gives him a run for his money, not only when her buns of steel break all kinds of furniture in a spanking session and she feels no pain but also when she gets her own back with a little dildo love on his posterior. The relationship between the two always has Steele on top but even with Black playing the Stalker and slightly obsessive male who demands she only be his but refuses to make any real commitment or admit his feelings…. Sounds all too familiar ladies?

Wayans has given this parody a good shot but he seems to have lost his comedic script writing mojo. Whilst on paper this should be knicker wetting funny, in reality, you’ll get a couple of laughs and a few smirks cross your face but the jokes dry up way too quick and the over the top acting loses its charm.

50 Shades of Black is out in UK Cinemas 11th March.