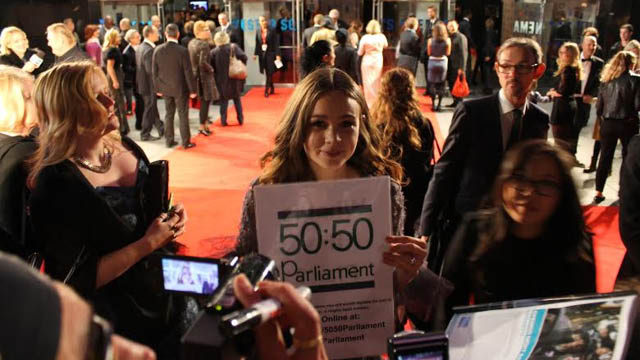 If you haven’t already seen ‘Suffragette’ in cinemas you should probably be in one right now, watching it. And then make your whole family watch it. And your friends. If your friends don’t want to watch it, they’re not real friends.

If you have seen it however, you will probably know that pictured above is Suffragette’s lead actress, Carey Mulligan, supporting the new suffragettes, 50:50 Parliament, who are campaigning for better gender balance in Parliament.

It’s pretty astonishing that it’s taken so long for a movie like this to be made in the first place, and maybe that’s why part of our modern mainstream generation fails to see the immense importance of this movie and the story it tells.

I sincerely hope that now that this movie has finally been made it might help reshape people’s views on revolutionary women. Because they’re still here, and there’s still a whole lot of work to be done, and they need to get heard.

Thanks to the suffragettes, women in the UK who were householders over the age of 30 got the vote in 1918. But that was only the beginning. Since then more and more people have been joining different movements to secure equal political, economic, cultural, personal, and social rights for women.

50:50 Parliament are one of the more recent movements that have surfaced with the revival of feminism in recent years and it is specifically reminiscent of the Suffrage movement, which started with the 1866 Suffrage petition.

Much like the Suffragettes, 50:50 Parliament are an inclusive cross-party movement of over 12,000 ordinary women and men from across the UK campaigning for better gender balance in Parliament.

This means that half of our population is not being properly represented.

And it shows. Like the other week when our parliament overwhelmingly made up of men who will never menstruate in their entire lives voted to keep the tampon tax, essentially taxing women’s periods; and that’s just the tip of the iceberg. Representation matters because it shapes policies, so help spread the word! Let’s finish what the Suffragettes started, go to change.org/5050Parliament and sign the petition!