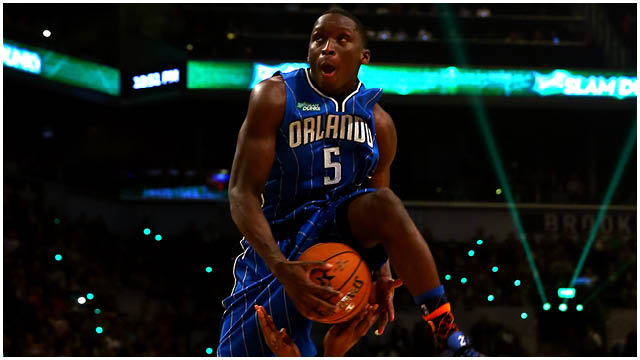 Victor Oladipo is one of the NBA’s most exciting stars, he was drafted 2nd overall in the 2013 NBA draft by the Orlando Magic and turned heads at All-Star Weekend 2015 when he pulled of his 360 degree reverse dunk.

Which player is the toughest to go head to head with?
I can’t pick out one player that’s the toughest to go up against. In the NBA, you’re going head-to-head with the best players in the world every night, so you have to be sure to be prepared to give it your all every time you step on the floor.

Would you ever consider making a musical album in the future?
I’ve always enjoyed singing and expressing myself through music. Right now I’m just focused on basketball, but we will see what the future holds.

The Orlando Magic have experienced a coaching change. How has this change affected the team?
The change was tough, but our responsibilities as players remains the same. We still need to go out there and compete to the best of our ability each and every game and give our coach our best effort.

Who is your best friend on the roster?
I have pretty good relationships with all of my teammates. Elfrid (Payton) and I are becoming good friends on and off the floor. We spent some time together when we were both in New York for All-Star Weekend, so that was a good time. We’re all a pretty close-knit group.

What are you doing to improve on the weak points of your game?
I think the biggest thing is to just never get satisfied and try and improve every day. Whether it’s through watching film, getting up extra shots or hitting the weight room, it’s important to identify the areas where I can improve my game and become a better overall player.

To follow the NBA in the UK, visit www.facebook.com/nbauk or www.twitter.com/NBAUK and watch the games live on BT Sport or via NBA LEAGUE PASS