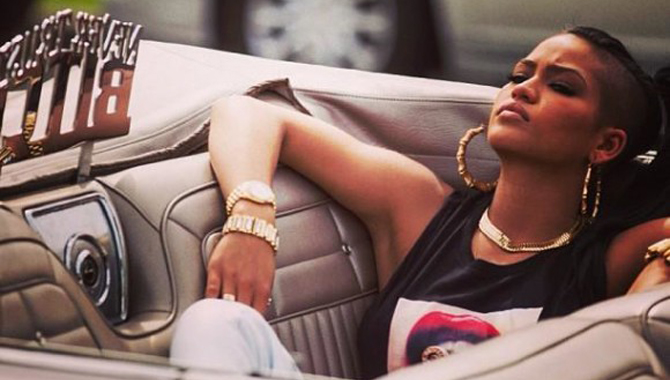 So Cassie Ventura (or Cassandra to her family)  hasn’t really been heard of much in the UK since her debut self-titled album was released in 2006. However, she’s still kinda famous in the states and looked smoking hot as she enjoyed a night out at Aventine Restaurant in Hollywood recently.

The once innocent songstress was sporting a traffic-stopping, extremely low cut dress and looked very pleased about it but she obviously didn’t get the memo that you show off legs OR boobs not both! Her dress was a million miles away from the all-white ensemble she chose to wear to the MTV Video Music Awards back in 2007. It was definitely more conservative but erm, well tacky and didn’t exactly set her up to be one of fashion’s elite. However, she was still finding her fame so we’ll let her off.

And it’s not only her style that’s changed drastically. She now has both sides of her head shaved and rolls with the likes of Rick Ross, Meek Mill and Wiz Khalifa all of whom featured on her 2013 mix tape ‘RockaByeBaby’. And, with a new album in the pipeline we may be hearing a lot more about the sexy star over the next few months.