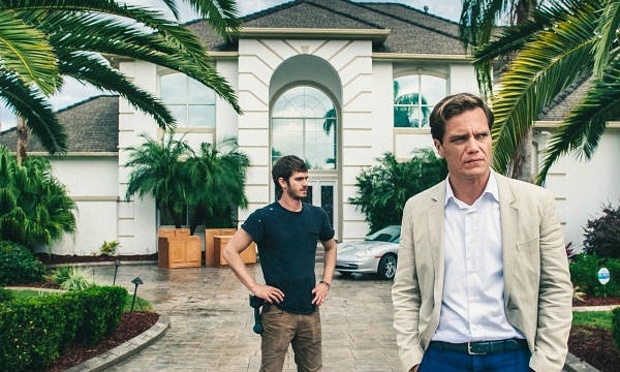 With a title such as 99 Homes, it’s not something that instantly pulls in any interest but don’t write off this film before you even seen it as it could prove to be one of those little hidden gems we stumble upon every now and again.

Dennis Nash (Andrew Garfield), is a law-abiding single Dad, struggling to earn a living wage to help keep a roof over the heads of his son, Connor, his mother and himself, when he finds himself kicked out of a court hearing in a bid to save his house from the heartless bank. Losing this battle he has nowhere else to turn.  Enter Rick Carver (Michael Shannon), the ruthless and cold hearted shark whose job it is to evict Dennis and his family from their home. This thrilling drama will see the rest of the film revolve around these two men as Carver see’s something in Nash and offers him a job working alongside him in the real estate business.

Nash takes the job, finding work on construction sites is near enough impossible, and being a proud man who wants to provide for his family see’s no other option to earn some decent cash to help him get back on his feet.  As Carver takes Nash under his wing, Nash keeps his job a secret from those that he loves for fear of a backlash. It’s simply a story of one will do anything for their family no matter how ashamed or humiliated they may feel in order to survive.

The film starts to resonate with its audience as it shows the rich only get richer as the poor and usually just down on their luck, run of the mill Joe struggle to keep up with loans they should never have been given in the first place, each scene we witness the pending or actual eviction of these poor people will get you right in the pit of the stomach. One scene stands out where Nash has to evict an elderly man who has absolutely nowhere else to go, it’s absolutely heartbreaking and Nash struggles too.

Over time, Nash starts to thrive as the big bucks roll in and see’s himself taking on the ideology of the man he once hated. Nash’s job to remove aka steal and vandalise AC’s and appliances from empty homes in order to claim the money back to “replace” them at the expense of the taxpayer and to fake lists of homeowners to get their hands on the relocation expenses see’s the money pile in but it’s not until he has to hand in a fake document to the courts in order to win a deal for his boss Carver his conscience finally kicks back in.

This is an intriguing and gritty and emotional drama which will sucker punch you when you least expect it. Be prepared to see Garfield in a completely different light as his star shines bright and delivers one of the best performances he has ever given.

99 Homes is out in cinemas 25th September.