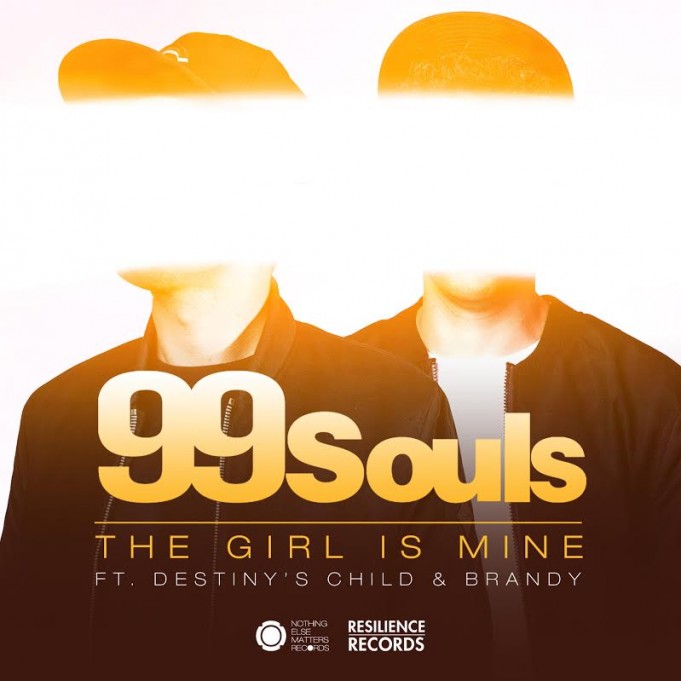 If there is one thing bound to get you anxious (as a musician) it’s getting clearance on a song or songs particular when said songs are the property of names like Beyonce, Brandy and Monica.

The Girl Is Mine is the bouncing re-work by the elusive duo 99 Souls. The track is a testament to the creativity and tenacity of the producers who are sure to make 2016 their year.

Flavour caught with the lads for a nice Q and A.

Individually what are your backgrounds in music?

Soul-From about the age of seven I was obsessed with hip hop. I started DJing during school and then producing and then when I was at uni I started doing more behind the scenes stuff like radio and promoting club nights. Then I started getting into dance music but Jo and I met through hip hop. We were both getting more and more into house and then one day a hip hop beat turned into a house track and we were both crazy about it… I guess that was the unofficial start of 99 Souls

Jo-I grew up playing in bands and then got really into jazz and was gigging on the scene in London. I started producing hip hop stuff and that’s when I met Soul and we started working together

You appear totally elusive-so a bit of info on you and what made you think ‘I could work with him?

Jo-I met Soul through a mutual friend and we clicked musically straight away. We both have the same vision in terms of doing whatever it takes to take the music and the project to the highest level artistically

Soul-We both have a similar outlook on music and life and want to do the same kind of things with music, so it was really just having a shared vision I think it’s our perfectionism-wanting to make a classic album and having stuff to say in our music that makes it such a natural partnership

99 souls and there is only two of you-EXPLAIN?

Jo- “99 Souls” comes from the concept of the 99%. Basically, we aren’t from the 1% who own everything and control most of society… Music is entertainment but most of our favourite artists stood for something, people like; Bob Marley, Bob Dylan, Marvin Gaye.

Soul- Ultimately we want to make music that means something and that touches on real issues. Don’t get me wrong we want to make massive hit records but Michael and Marvin and 2 Pac managed to combine the two and they had a real effect on people and the world. We just want to make giant records with meaning.

The Girl Is Mine was said to be a ‘promotional track’ what a promotion-why this particular remix from the plethora of immense 90’s bangers did you chose this one?

Soul- It was the same as when you sample music, “do I love it?”, “can we make something amazing with this?” As a new artist with no backing we deliberately picked stuff that would help get our name out there as well. We were looking for something that we loved something we could make a sick record with and that’d help us get our name out there. Rather than just slapping one acappella on a beat we wanted to switch it up and actually create a new song by weaving two together.

Jo- We both loved the original The Boy Is Mine from Brandy and Monica. Soul had the idea to flip the gender using Destiny’s Child’s ‘Girl’. From there we were writing the song from the perspective of a guy to a girl, so we had to carefully use the lyrics from the two songs in a way that made sense.

So of course it’s huge to have Beyonce loving your track but how did you find out?

Soul- It was pretty nerve-racking finding out! We had two big hurdles to overcome before the CEO of Sony was going to take it to Beyonce. We had to sort two “no’s” we’d had because with them out, if Beyonce said no as well, the whole record would’ve been killed so we were holding off on going to Beyonce while we tied up the loose ends.  Then Beyonce’s publisher was in London and Wretch 32’s manager played it to him and then Beyonce’s publisher played it to Beyonce and luckily she loved it

Are there any other 90’s bangers remixes in the pipeline?

Jo- After the heart attacks we had trying to clear this record I can honestly say I hope to never sample a record again!

Soul- I’d happily sample again but it’s more a thing of, even though I love music with sampled vocals, it’s not really how you make an album. Like you said before this was just a promo track. We might do more, whether just for fun or for a single before the album, but it’s not going to be how we make our album.

So it states; “We’re making an epic soul, meets gospel, meets 2016 house album where every song means something. We just want to make a classic, timeless album!” give some more meat on the bones about that coming album?

Jo- The album we’re making is probably the thing we’re most excited about. We’ve already made around 80 tracks from which we’ll pick 15 or so. It’s a lot of live instruments with a real soulful edge. We’ve already collaborated with Cee Lo and Marsha Ambrosius-we want to make a modern classic.

Soul- Right now we’re not too deep into vocals for the album but when we play people the instrumentals, everyone from random people to Grammy winners to label people go nuts. Now it’s about writing amazing songs and not just generic cookie cutter BS!

Why House music (in my agent provocateur mode)-hasn’t house had its day?

Jo- To be honest if it wasn’t for house, we probably wouldn’t be doing this project. The great thing about our project is that we can make beautiful music using any and every instrument, give it a kick drum and it’s house.

Soul- I think it’s the album I’ve always wanted to make in my head; just the tempo and beat have changed over the years. When I was proper into hip hop I’d basically made “My Beautiful Dark Twisted Fantasy” in my head ten years before it came out. We’re basically making an epic soul album filled with songs with substance, the same as Isaac Hayes 40 years ago or Kanye West 5 years ago or us in a year or two. We’re just finally in the position (touch wood) to realise the vision and bring it to the world rather than it just being in our heads. The only difference between us and all the other people we’ve mentioned is the house beat. I guess right now that’s just what we’re drawn to and the combination gives it something a little bit new and fresh
Lastly what’s cracking in terms of you and the live circuit?

Soul- The new year’s under wraps for now but before then we’ve got Sheffield for NYE, Blackpool Rocks with Duke Dumont, Annie Mac, Craig David, Danny Howard, Claptone and more and quite a few other exotic club dates… Costa Del Coventry, San Romford and the Reading Riviera!