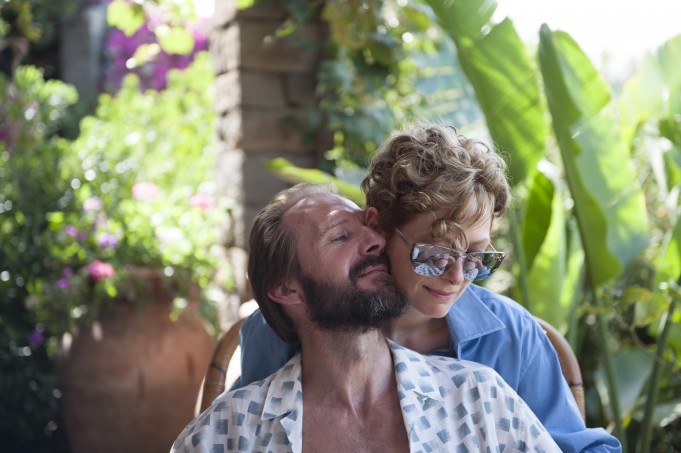 Starring Tilda Swinton in the form of Marianne Lane, a rock star, which we learn from numerous story flashbacks, takes on the persona of a David Bowie type character on stage. Whilst taking a well needed rest break after an operation on her throat, which renders her actually speechless with only a tiny whisper allowed to leave her lips, with her lover Paul (Matthias Schoenaerts) in the stunning settings of Pantelleria, they play the unexpected and reluctant hosts to her one time lover and old friend Harry (Ralph Fiennes) and his daughter, Penelope (Dakota Johnson) but it’s clear that Harry has ulterior motives where Marianne is concerned. Harry is also an old Music industry veteran, he is extremely hyperactive and he never shuts up, he almost has a story for everything from working with The Rolling Stones, to excessive drug use, to knowing the perfect foods and types of ricotta and where to obtain it from. He constantly knows how to push Paul’s buttons and Marianne’s too, but where Paul starts to find him irritating, Marianne starts to melt to his ways and he slowly makes his way into her head.

What then unfolds seems like a game of emotional cat and mouse; Marianne and Paul are passionately in love and Harry and his daughter Penelope seem to have an odd slightly sexual relationship, Harry then takes advantage of every single moment to lure Marianne away from Paul while Penelope seductively but very discreetly seduces Paul, you don’t witness anything happen between these two but the suggestion is there. Anyone would think they are on a swinger’s holiday. Outstanding performance comes from Ralph Fiennes; he will totally blow you away. Don’t expect to see those prim and proper characters from days past. Donning a heavy set beard and brazenly strutting around the film with his shirt off for 90% of the time, and his trousers too to reveal quite an eyeful. He has taken comedy to the next level in his game. In one scene he completely steals the show with a dance to the Rolling Stones Emotional Rescue which will have you wetting yourself.

A Bigger Splash is released in UK Cinemas 12th February