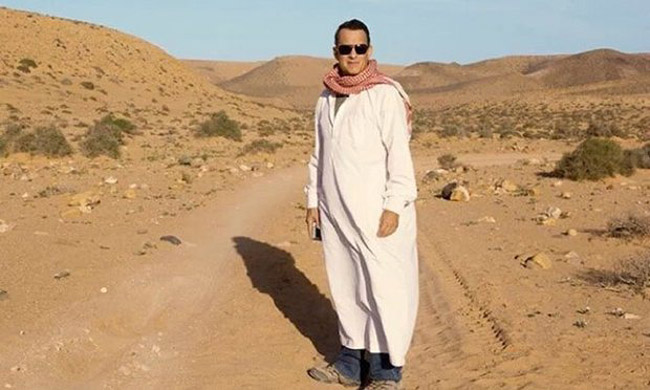 Tom Hanks teams up yet again with Cloud Atlas Director Tom Tykwer for A Hologram for a King, the film adaptation based on the best-selling novel from Dave Eggers. Once again Hanks proves in abundance his likability as his frustrations play out as Businessman Alan Clay.

A lot is packed into the first half of A Hologram for a King; we are introduced to Clay with a song and dance routine to a Talking Heads song – once in a Lifetime – which completely throws the audience of the scent of the route the film actually goes down.  We then see Clay arrive in Saudi Arabia to sell the King a new visionary technology system for holographic virtual conferencing. The King is nowhere to be seen and his team has been banished to a tent with inadequate equipment and lack of provisions. Clay is given the run around as to when to expect the King or even talk to the man in charge of the whole set up. Clay also befriends a local taxi driver after, on numerous occasions, he misses the bus to take him out to the complex where his team is setting up for the meeting with the King. We also have a couple of ‘love’ interests, one includes a flirtation with a Danish woman (Sidse Babett Knudsen) who works at the company and likes to get him drunk. The other love interest comes when a large lump on Clay’s back causes concern after he tries to lance it for himself. This see’s him taking a trip to the local hospital. He meets a stunning doctor, Zahra Hakan (Sarita Choudhury), and they instantly have a forbidden attraction to each other.

It’s here where the story finally settles into its flow, there love being kept low key and Zahra, even though a modern woman still has to adhere to the strict values of a country which isn’t as liberal as the western world.

Hanks has a knack for creating a characters that are so affable in all his films and Alan Clay in A Hologram for a King is no different, and even when his character doesn’t get the result he needs for the reason for his visit there is just an air of ‘oh well’ like it never really mattered in the first place. Hologram has a notable cast in Ben Whishaw and Tom Skerritt but they prove to be just extras with no real impact on the film.

A Hologram for a King is in Cinemas May 20