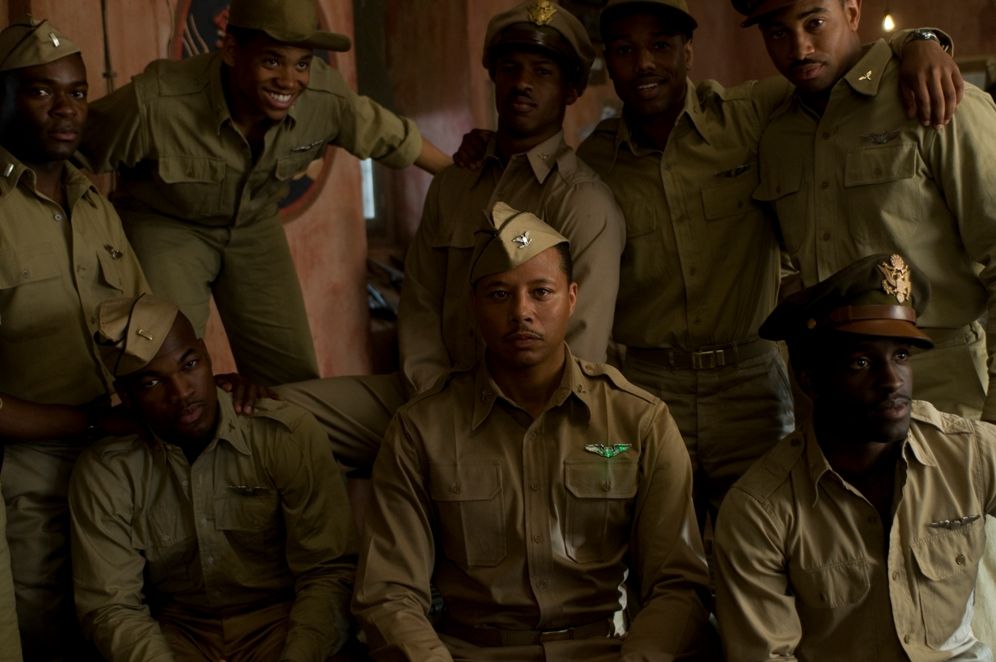 Whether in the booth or on the big screen, the mega talented Ne-Yo is a force to be reckoned with. In his latest role, the singer-turned-actor plays flight officer Andrew ‘Smoky’ Salem in the much talked about Red Tails, a film set in 1944 during World War II about the Tuskegee Airmen.

The movie, directed by George Lucas tells the true story of a group of African-American pilots who overcame racial discrimination to become one of the most distinguished squadrons. Despite a bag of chart hits, Ne-Yo is known to wear many hats in show business and yet again he adds another gift to his impressive collection. To top it off, the powerhouse entertainer has not only got a new movie on the way but also a brand new album. Here, he tells us about his character in Red Tails, being teased about his receding hairline by his co-stars, why he’d like a role in Star Wars, and how his aunt inspired Beyoncé’s hit track ‘Irreplaceable’.

You play Andrew ‘Smoky’ Salem in Red Tails. Now, you were already familiar with flying as a passenger in planes but, in real life, you aren’t much of a pilot, right?

Though this movie is quite intense, it seemed like there was a lot of humour behind the cameras. What kind of atmosphere was it on set?

The one thing that’s still stuck with me about the way they did this is that the whole time we were filming we were in 1944. We were not allowed to have any current music or entertainment in order to ensure that we really understood just how difficult it was for those men, and to do the things they did in the time that they did. There was no choice but to have comradery with the person next to you and there’s always going to be some comedy. At night as everybody would go to sleep, we’d make jokes and do all sort of silly stuff.

You said earlier this year that your fellow cast member’s made fun about your hairline. They don’t sound like very nice guys?

[Laughs] I mean I’m pretty sure they wouldn’t have made as many jokes if they had any indication that I was bothered by it, but I am not. I’m the kind of person that believes that if you can’t laugh at yourself, you will end up a really unhappy person for the rest of your life because people will find a reason to laugh at you. And to keep it real my hairline is definitely a reason to laugh, and we did that with everybody. Elijah Kelly, for example, is one of the darkest men on the face of the planet, and we didn’t hesitate in letting him know how dark he was.

The story of the Tuskegee Airmen is not just a movie or chapter. What can you tell us about this historic tale?

The Tuskegee Airmen did absolutely exist, and they did some incredible things during the war.

Let’s talk about your character Smoky, who has a very deep American accent. Did you speak with this same accent in between takes? And was it a challenge playing this role?

The accent definitely got stuck. I am originally from Camden, Arkansas, which is Deep South not far from where Smoky is from in Alabama. So once, I got reacquainted with that accent it also took me back to when I used to talk with the same accent. I went home to visit my mum, and she had a ball laughing at the fact that I sounded like I was ten years old again. The most difficult part for me in playing this role was just keeping up with the other actors. I was probably the most novice actor there, but the cool thing about it is that they all embraced me with open arms.

The movie boasts a huge cast – rapper Method Man along with Cuba Gooding, Jr and Terrence Howard. What was it like working with them? Were you all one big family?

We all honestly became brothers. We really did. This was exactly due to the purpose of bootcamp and the whole 1944 set up  which they did to create within us the kind of comradery that the Tuskegee airmen had for one another. Until this day, we’re all still good friends and everybody that was a part of the project all have a bond that I feel can never be broken.

Would you be interested in revisiting your character for a sequel?

Absolutely! Why not? I’m ready, George Lucas call me.

Speaking of George Lucas [Creator of Star Wars], he recently announced plans for a Star Wars live TV series. Are you also expecting a call for that?

If that call came that would definitely be one that I wouldn’t ignore. He did say that we were going to work together again at some point, but he didn’t say when. From the outside looking in, life seems amazing. Five studio album, fifteen singles and eleven music honours all before the age of 30. Have you ever taught of writing a book about it?

It is something that has been brought to my attention, but to write a book right now would be a story with no ending. I am not done yet as I have got a lot more to accomplish before I start documenting stuff like that.

You’re a master in the art of storytelling. You’ve worked with everyone including Britney, Celine Dion, Jennifer Hudson, Chris Brown, Michael Jackson and Whitney Houston. Have you ever had to turn any artists down?

Unfortunately, I have had to do that about once or twice. I thank god that I’ve never come across anybody that took it personally. Whenever I have to decline an offer, it never comes from a place of animosity, just simply a standpoint of, I have so much on my plate that it would be disrespectful for me to try to take on what you’re asking me to do because I won’t be able to give it the attention that it deserves. Normally, when I start the process of writing my album I have to sort of shut everything and everybody down just to get the best out of myself.

How did you come up with the concept for Beyoncé’s ‘Irreplaceable’? Did an angry lover dump your clothes in a box to the left?

No! The story is about an aunty of mine, who was dating this guy, and she later found out was cheating on her. So it was actually he’s clothes that were in a box to the left. I grew up with my mum, grandmother and about five of my aunts, so I was around for all of those stories.

Was your aunt pleased about you writing a song about her?

Initially, she was a little upset that I quote on quote put her business in the street as she said, but once she saw how well the song was doing and how much money I made from the song, she later changed her tone…[Laughs]

You’re new album ‘R.E.D. (Realizing Every Dream)’ is about to be released. How would you describe it?

It’s a perfect blend of RnB as well as pop and dance music. This is the album, where for the first time ever I paid attention to the fact that I have a very broad and vast fanbase. I feel like I’ve accomplished to satisfy everyone with this album, but I’ll let the fans be the judge of that.

Is there anything that you’d like to do movie-wise that you haven’t done yet?

Given the opportunity, I’d like to play a villain. They seem to always have more fun. I mean I’m the good guy in real life, but I wouldn’t mind turning the tables and playing the bad-guy… I’m also a huge martial arts buff I’ve been a fan my whole life. I even studied martial arts for about five years. My dream role is to star in a martial arts movie.

Maybe you could replace Chris Tucker in the next installment of ‘Rush Hour’?

Yeah! Who knows? Tell Jackie [Chan] to call me.

Red Tails is available on DVD, Blu-ray and to download from 29 October courtesy of Momentum Pictures. For more information visit www.redtails2012.com