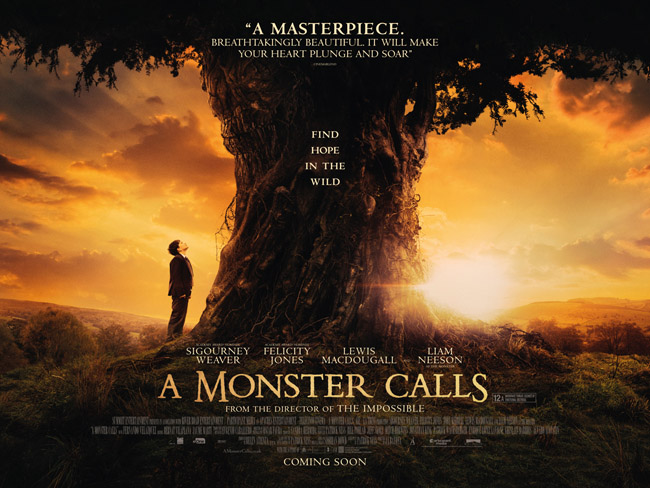 Don’t be fooled by the clips or trailers you may have seen for A Monster Calls, aiming for one type of audience it may not be suitable for with a subtle comparison to the recent adaptation of Spielberg’s The BFG.

It’s much darker than you would expect from a so-called ‘children’s’ film with its theme of loss and guilt at its very core that will have you choking up at any given moment.

Not quite suitable for the very young, A Monster Calls takes it beauty from the novel by Patrick Ness, which has been adapted for the big screen with emotive passion by director J. A. Bayona, full of fantastical fantasy and visceral animation which explodes like a palette of watercolours to give our young protagonist Conor, played with an exquisitely heartbreaking force by Lewis McDougall, his strength to carry on when his whole world is collapsing around him as he struggles to cope with his mother’s terminal illness.

Whilst being bullied at school, Conor has a difficult home life, being brought up single-handedly by his cancer-ridden mother (Rogue One’s Felicity Jones) the pressures of making sure she is OK see’s him dealing with the situation in a unique and graceful way which manifest themselves in his sleep and through his talent for drawing sketches. Enter the Monster from the title, a gigantic tree, brought to life with an ominous touch by the dulcet atmospheric voice of Liam Neeson. A Monster in which Conor can finally air his frustrations to, a new found friend who promises to tell him three stories, in return, all Conor has to do, is tell him his deepest darkest nightmare.

Even with the good intentions of the Monster, Bayona has created something that instils fear into its audience, a far cry from anything Spielberg created in The BFG. A no-nonsense being whose stories consist of old world tales – enhanced with simplistic animation that have an underlying message that ties into the way Conor is feeling and his situation giving him the strength he so desperately craves.  Anyone who has had to deal with watching a loved one in pain, suffering so immensely in front of their very eyes will no doubt connect with Conor’s character and the emotions he is going through, even if not you’ll still find yourself choking back the tears, those ones that come with the whole lump in the back of the front which leave you gasping for air.

Felicity Jones, albeit not with a huge part to play, plays a difficult role with magnificent perception and Sigourney Weaver as her mother and grandmother to Conor – a steely, old-fashioned and cold woman – reveals vastly in her portrayal of a Mother going through the motions of losing her daughter.  However, the star of this show goes to the young Lewis McDougall with his emotional turmoil hidden on the surface but once alone manifests itself in spectacular fashion.