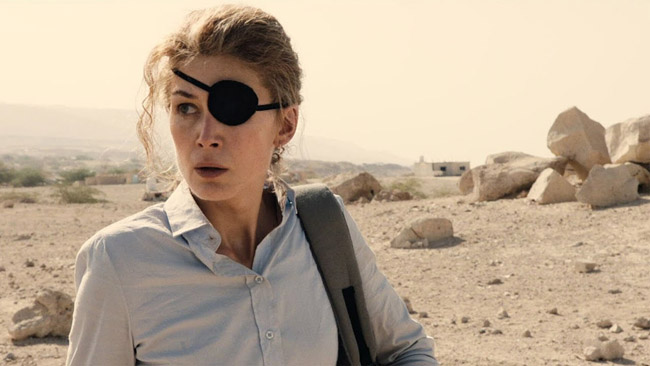 There comes a time we all need a little reminder exactly what it takes for reporters to report from the war-ravaged countries of our world, to deliver the news of heartbreaking atrocities some would rather keep quiet. Matthew Heineman’s latest delves into that very subject here, detailing the highs and extreme lows of Marie Colvin’s career as a war correspondent for The Sunday Times, a career that ultimately cost her, her life.

The basis of the film comes from the Vanity Fair article “Marie Colvin’s Private War” by Marie Brenner and follows the American born expat Colvin, played with a pounding determination by Rosamund Pike, over approximately 10 years of her career, based in London, at The Sunday Times. It’s certainly not for the faint-hearted as Heineman is relentless from the word go, throwing Colvin straight into action as the first foreign journalist to report from the Tamil-held Sir Lanka, a mission in which she ultimately loses an eye in the cross-fire.

Over the period of the film, this fierce and powerful woman doesn’t let the loss of an eye hold her back. We follow Colvin to Iraq where she hires the freelance photographer Paul Conroy (Jamie Dornan) to document her gruesome findings. From the uncovering of a mass grave from Saddam Hussein’s reign – which culminates in a painfully emotional scene of wailing women waiting to reclaim the bones of their loved ones -, the Taliban attacks in Afghanistan to Libya in which she bags herself an interview with Gadaffi, then ultimately to Syria.

Back home in London, Heineman also tackles the issue of Colvin’s mental health. After all those years witnessing and experiencing such death and devastation it’s bound to have an effect on even the steeliest of characters and this is depicted through the lens of numerous flashbacks. In the quiet solitude of London, the party-loving Colvin dabbles in a drink or two to block out those deathly demons and even embarks on a relationship with Businessman Tony Shaw (Stanley Tucci).

Pike is at her career best as Colvin, an opinionated journalist, with a thirst for uncovering the truth. Pike also shows there was another layer to a woman who gave her life for what she loved the most. Alongside her fierce grit, rebellious nature and resilience were an overtly sexual woman and one that had times of vulnerability shown in her weariness in whether the reading public was just turning a blind eye. Let’s face it; most people don’t take any notice until it’s happening on their own doorstep.

There will be comparisons to Kathryn Bigelow’s Zero Dark Thirty in which Jessica Chastain plays the role of the female protagonist on a peddle stool. Colvin was a woman breaking ground in areas where men are predominately supposed to be the ‘heroes’, but essentially this moves the idea on and gender doesn’t even become an issue as its investment lays wholly with its transfixing story. Uncompromisingly visceral and tonally raw Heineman’s A Private War is a powerfully traumatic memoir to a courageous journalist.