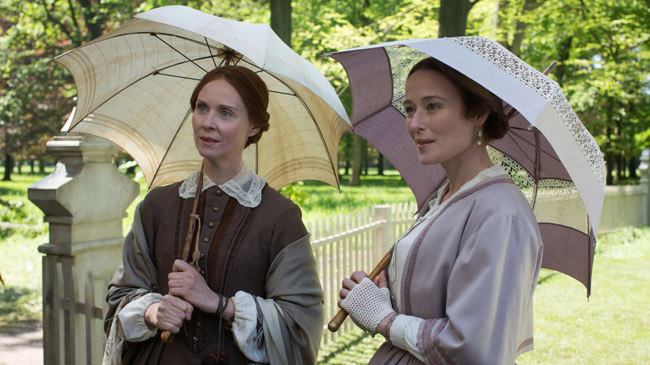 The last thing you would come to expect from a period biopic would be anything but quirky but Terence Davies, A Quiet Passion, the story of the 19th century American poet Emily Dickenson, revels in a slightly left of centre fascinating drama of a women trapped in an era that wasn’t quite ready for her individualism and feminine strength.

If Davies biopic is to be believed, Dickenson was a contradiction within herself, a highly respectable women but full of frustration, the bulk of this story is told in the life of an adult Dickenson, living her reclusive life through her closest friend Vryling Wilder Buffum (Catherine Bailey), a godless women who did what she pleased, turning her back and nose up at the priggish snobbery of the days attitudes, the mirror image of the woman she longed to be but didn’t have the courage to quiet break free.

Very rarely do we venture outside the confines of the Dickenson house in Massachusetts, Emily (Cynthia Nixon) emerges from her childhood like a phoenix from the flames, highly religious but bordering on a hatred for all the trappings that come with it, Rigid and emotionally stunted, romance or the simply interest in men is far beyond her literary thoughts. Fiercely loyal to her family, sister Lavinia (Jennifer Ehle), Brother Austin (Duncan Duff), Mother Emily (Joanna Bacon) and her patriarchal Father Edward (Keith Carradine) although they have their own internal family struggles.  Dickenson struggles with sympathy or empathy for her family’s issues, tough love is the order of the day on her menu. We do, however, have a glimpse into her dark heart when she forms an affectionate bond with the local married cleric but only after a heated discussion with her sister do we learn of her true feelings for a man who can never reciprocate.

A Quiet Passion has an almost mocking tone to its storytelling which lends a witty dialogue to its hammering home of religion, a depiction of a women who wanted to break out the social norms, very rarely leaving the confines of her home, who in her later life became a bitter women, angry at everyone, not liking the person she had become or the life she had before her death in 1886.

The casting is exceptionally brilliant; Cynthia Nixon’s depiction of the rigid, frosty and questioning Dickenson is almost reminiscent of her Sex in the City character Miranda Hobbs with a supporting cast that is articulate in their character portrayal. Dickenson’s work doesn’t go unmentioned either; her struggles as a female writer are overcome with her first work published anonymously and subsequently, lines are blazoned across the screen of the authentic and classic imagery of clean cut, fine lines of the period.

Davies non-conventional third feature is a quirky and rigidly witty ode to a woman who was simply confined by a period of time she simply wasn’t made for, it begs the question if she lived in an era a hundred years after her time would she have been the extrovert she suppressed.

A Quiet Passion is out in cinemas April 7th.