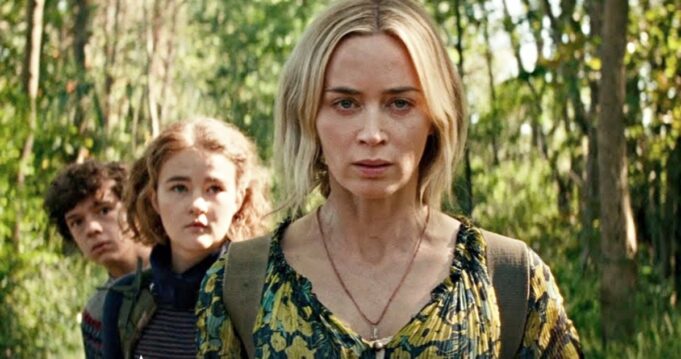 It’s been a long time coming, in fact, it’s just over a year since John Krasinski’s horror baby and sequel to the critical and audience acclaimed A Quiet Place was originally due to hit the big screen.

To say it was worth the wait would be an understatement, who says we need Christopher Nolan and his twisty turny theatrics to save cinema when John Krasinski barely requires dialogue to get the job done.

Even though we lost Krasinski’s Lee in the first, that sly dog has still managed to shoe-horn his way into the sequel with a terrifying prelude that kicks off with the invasion of the sound-sensitive alien’s and their utter apocalyptic destruction of the world as we know it before bringing us back to the present. It’s a present where those humans that are left are learning to survive with its biggest threat constantly on the horizon.

The action still revolves around Emily Blunt’s Evelyn and her family, but on their way to find a safe haven, they stumble across old family friend Emmett (Cillian Murphy), However, this movie is all about the next generation and her daughter Regan, played brilliantly by Millicent Simmonds, paired with her hearing aid that emits high-frequency pitches that puts the alien into stun mode, becoming the hero of this picture.

With Regan convinced there are others out there sending radio signals to guide them to safety, Evelyn sends Emmet to accompany her to fight off not just the threat of the aliens, but other humans that seem to have turned into some feral zombie’s only looking out for number one. Where there are some pretty intense and gripping moments on the journey front, back at base camp the oxygen used to subdue any loud noises from the baby opens up a whole new world of terror for Evelyn and son Marcus (Noah Jupe) who both seem to have a mean shot in blowing up the heads of advancing aliens.

Whilst still very much a sound movie it’s not short on dialogue, in fact, the dialogue has more than doubled since the original but it feels horrifyingly more grounded and at home with its new normal. As always there is no faulting its intensity and gripping confidence in a most pleasing movie experience. If there was any film that should get you back into cinemas, make this top of your list.