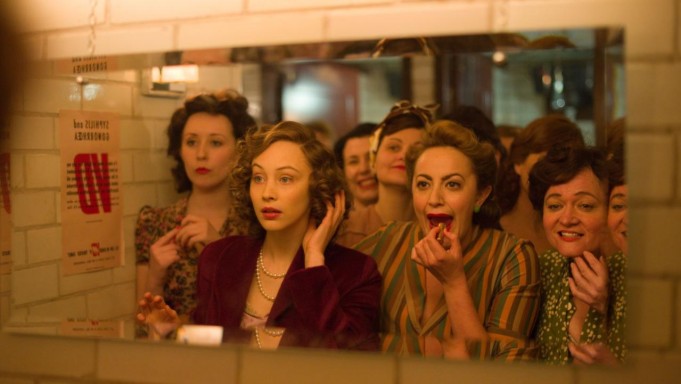 A slice of history all should know about Britain is the resilience and resolve of the Great British public during our toughest time. But this film doesn’t show that as we witness what our royals might have got up to on VE night.

Britain has won the war against Germany and the country is getting ready for the VE night 1945 celebrations. Enter the teenage Princesses Elizabeth (Sarah Gadon), the future queen of England and Margaret (Bel Powley), her slightly wild sister. Desperate just for one night of normality and to join the celebrations, Margaret persuades Lillibet to work on their parents, King George (Rupert Everett) and Queen Elizabeth (Emily Watson), to let them out for the night, incognito. Reluctantly they let them go with a couple of chaperone’s to get a feeling of how there people are feeling.

Straight off we can tell the scriptwriters have created a complete fantasy, full of fabrication of what may just have happened that night but this isn’t a bad thing. The film is full of fluffy charm and especially from the performances of the young actresses playing our royals. Elizabeth being a sweet and calm girl gets separated from the bubbly Margaret very early in the night and we see a very sensible Elizabeth chasing her around central London.

On her adventure, Elizabeth meets up with the very handsome but very disillusioned soldier, Jack (Jack Reynor), who ends up keeping her safe as he escorts her throughout the mean London streets trying to get to Margaret. We do like Reynor but if you’re going to play an Englishman you need to work in your accent a little better. His deep Irish tone, at times, seeped through his attempt. However, Elizabeth and Jack become close throughout the night and a romance blossoms between the pair.

Of course, eventually, everything ends well with the pair finally catching up with the comical Margaret, who in a drunken state has to be basically carried home in the early hours of the morning, but the so-called romance between Elizabeth and Jack can’t go anywhere and has to end.

A Royal Night out lacks any real substance and won’t be for everyone, but it is full of fun, has a soft, fluffy marshmallow touch and will keep a certain type of audience smiling.