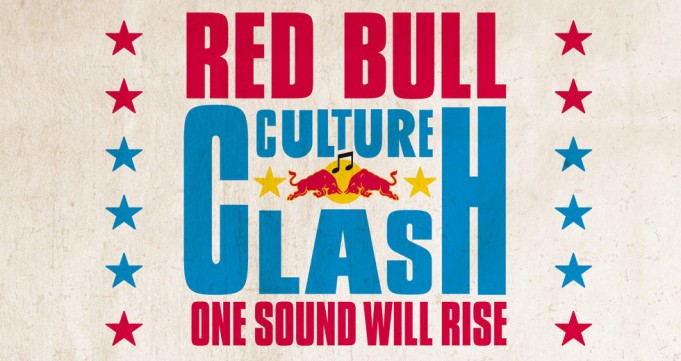 THE WORLD’S BIGGEST MUSICAL BATTLE RETURNS TO THE UK Red Bull Music Academy have announced the line-up for Red Bull Culture Clash, which returns to London for a fourth time, this time bringing unparalleled levels of volume and energy to Earls Court and a 20,000 strong crowd. On 30th October 2014, the biggest names in bass will enter the venue for this innovative live music concept featuring four stages, four sounds and one winner.

Red Bull Music Academy has called in some of the music world’s heaviest hitters to go head-to-head. Harlem supreme rap squad A$AP Mob, grime collective and reigning champions Boy Better Know, the specially-created-for-one-night-only Rebel Sound (comprised of bass superstars Chase & Status, World Clash champion David Rodiganand jungle pioneer Shy Fx) and Jamaican stalwarts of the reggae scene Stone Love all take to a stage each. These crews will need to work hard to win over the crowd – Red Bull Culture Clash is about who has the heaviest sound, the best tunes, the biggest special guests, the most on-point refrains and the all-out most ambitious, take-no-prisoners presen­tation. Calling out opponents, mockeries, diss records and coun­teractions are explicitly encouraged to hype up the fans into supporting a crew and ultimately deciding who will leave Earls Court the victor of this unique event.

Rooted in traditional Jamaican sound clashes, and paying big respect to the soundsystem culture that plays a loud and proud part of Britain’s music history, Red Bull Culture Clash takes clashing to another level. Crews, sets and dub plates are created bespoke for just one night with four rounds presided over by DJ Annie Mac (who lead her own crew at Red Bull Culture Clash 2012) and comedian, actor and rapper Doc Brown.

Doc comments: “Sound clash culture has been filtering over from Jamaica since the early 1950’s, but this is the biggest event of its kind the UK has ever seen. As for my role, I’m going to be like a good football referee, keeping things running smoothly from the side lines.”

In the lead up to Earls Court on 30th October, Red Bull is delivering a series of clashes in Birmingham, Bristol and Leeds, with the full line up to be announced soon.