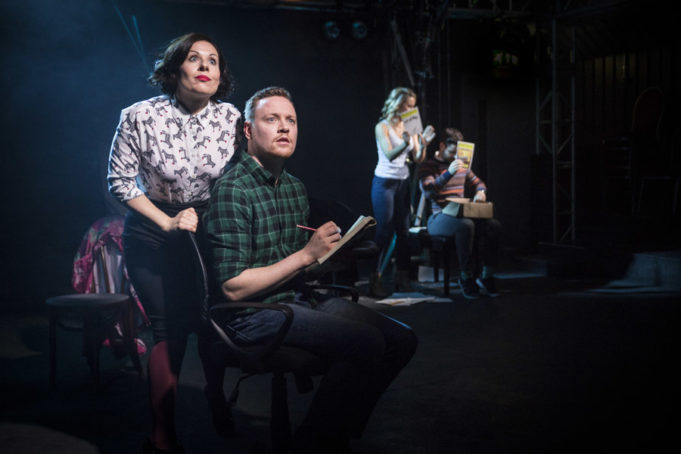 Above The Stag (the UK’s only dedicated LGBT+ theatre) are presenting their production of the hit Broadway musical, [title of show] which will run in the Studio space at Above the Stag Theatre from Wed 13th Feb until Sun 10th Mar.

Jeff and Hunter have a dream – and that dream is for their work to be selected for the upcoming New York Musical Theatre Festival.

The submissions deadline is only three weeks away, and our heroes don’t actually have a musical to perform. But that’s not going to get in their way – because they have a whole three weeks to write it.

Recruiting two more friends to work with them, they embark on their journey, full of naive hope and wild optimism – even if nobody can come up with a killer name for the show.

Excitement mounts; if the show is a hit, they could replace the four ugly mismatched chairs on the set with chairs covered in diamonds.

And then … their little three-week-old musical defies the odds and is CHOSEN for the prestigious slot, and what’s more, when it comes to performance time, fancy industry people are in the audience.

The show is a HIT. Plans progress toward taking the musical to Broadway …but that’s when the egos start to clash, and everything begins to unravel…

The more successful they become, the more the four begin to drift apart, and to wax nostalgic over younger, happier, less complicated days.

Will they remember that their relationship and the quality of their creation are more important to them than commercial success? And more importantly – will they ever get their diamond chairs?