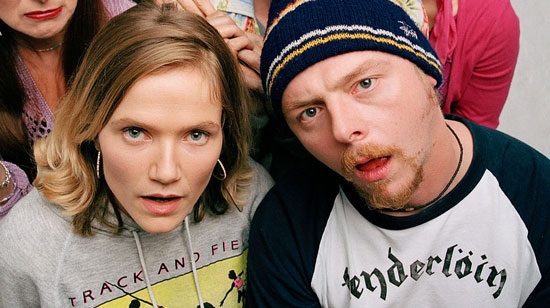 Some actors work hard for years and never get a lucky break, while others seem to get all the luck. Let’s take a look at the careers of some of Britain’s biggest actors that have recently made it big after years of graft…

Then:
Serafinowicz’s career really took off when he provided the voice for Darth Maul in Star Wars: The Phantom Menace and acted in cult TV comedy series Spaced. Serafinowicz has put his distinctive voice to good use, in cartoons and more recently in a TV advert for Motors.co.uk. He also directed music videos for Hot Chip.

Then:
The comedienne used to belong to an improvisation group with Rob Brydon and Ruth Jones. She has starred in countless British comedy series including I’m Alan Partridge, Gavin & Stacey, Little Britain, Brass Eye and of course Nighty Night, which she wrote. Now:
Davis is currently starring in Hunderby on Sky Atlantic, a show she created and wrote herself. The series was nominated for three BAFTA awards last year and Davis won the BAFTA Craft award for best comedy writing.

Then:
At university Simon Pegg performed in a comedy troupe with Little Britain star David Walliams. In 1999 he created comedy series Spaced with Jessica Hynes. Spaced was a cult hit and Pegg went on to write and star in three films- Shaun of the Dead, Hot Fuzz and The World’s End. Now:
Simon Pegg is a star across the pond, thanks to his recent roles in the Star Trek film franchise and Mission Impossible: Ghost Protocol. Not many people know that he is godfather to Chris Martin and Gwenyth Paltrow’s daughter Apple.

3. Jessica Hynes
Then:
In 1997, back when she was still Jessica Stevenson, the British actress guest starred in the first ever episode of Midsomer Murders. She famously played next door neighbour Cheryl in The Royle Family but didn’t become famous until cult comedy series Spaced aired in 1999, which she co-wrote with Simon Pegg. Now:
Despite not enjoying the same international fame as Simon Pegg, Hynes’ acting career is still going strong. She has appeared in independent British films and does a lot of theatre work- she has won two British Comedy awards and has been nominated for a TONY, a BAFTA and a Laurence Olivier award.