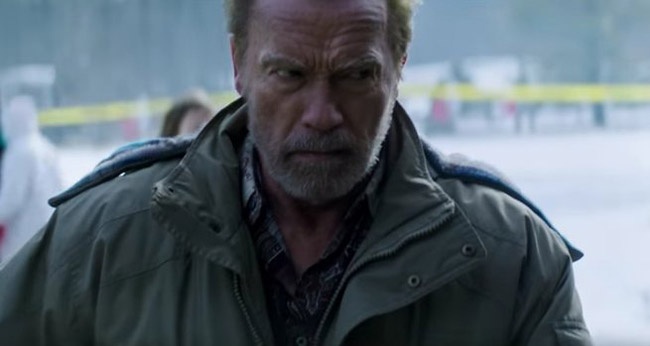 Arnie Schwarzenegger’s adventures in indieland continue this week with the arrival of Aftermath, based on the true story of a plane crash.  Are we about to see an Arnaissance?

Now that he’s non-too-impressed with his proposed cameo in Shane Black’s Predator re-boot, Arnie Schwarzenegger may have some time on his hands – especially as Universal now appears to have shelved the long-awaited Conan sequel.  So the arrival of his second indie feature, Aftermath, could be timely – and may end up pointing to a change in career.

His first venture into smaller movies was two years ago in Maggie, where he played the father of a zombie.  He’s a dad again here, a construction worker called Roman, waiting at the airport for the arrival of his wife and their pregnant daughter.  They never get there, as their plane is involved in a mid-air collision.  He is, inevitably, devastated by the tragedy, but that’s just half of the story.  The other half belongs to air traffic controller, Jake (Scoot McNairy) who, alone in the control tower, misses the crucial call from one of the aircraft.  Both men are searching for answers and, eventually, their paths meet.

It’s no spoiler to say that it doesn’t end well.  It’s a film with problems – and not just the ones suffered by its main characters.  At its core are fraught subjects like grief, guilt, trauma and loss and the idea of following the two men, who are affected in different ways, is a good one, even if it is conventional.  But it does other things really badly.  Like patronising the audience with repeated shots of planes in the air – bright blue sky, vapour trail, the lot.  It even goes so far as to show two vapour trails crossing over.  We don’t need to be constantly reminded what happened.  The soundtrack is overwrought to the point of smothering and there are times when silence really would have been golden.   And there is something artificially tidy about the crash site when Roman visits it: debris is carefully placed on the ground and items hang neatly from the trees. The only impact comes when he looks up to see his dead daughter, still in her seat and hanging by her seat belt in a tree.  We don’t get much more than a silhouette and that’s all we need.

There is actually a decent story buried in here, one that could examine thought-provoking issues and situations.  But it’s approached in such a clunky manner – the scriptwriter’s equivalent of black and white – that it never stands a chance of breaking free.  It needs to take a whole wodge of leaves out of Kenneth Lonergan’s screenwriting book, particularly the one labelled Manchester By The Sea, which was about similar issues and emotions, but treated them with much more depth and subtlety.

If the film has a redeeming feature, it’s the performances from Schwarzenegger and McNairy as the two tortured souls.  Arnie’s hair might be a little too immaculate and he hardly ages over the years that pass in the film, but it’s a decent enough piece of acting.  You genuinely empathise with him and you feel just as much sympathy for air traffic controller, Jake.  What happened to him could have happened to any of his other colleagues.  He was just in the wrong place at the wrong time.