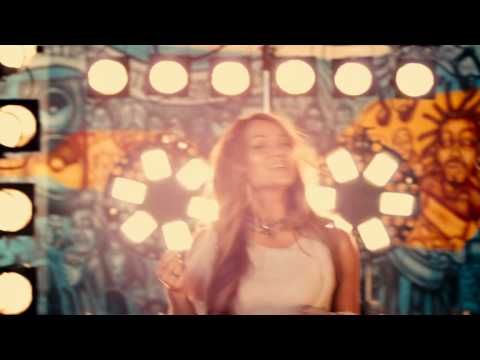 With his undeniable Brazilian suave and South London-born swag, Aggro – back in 2006, made girls unleash their rebellious natures – and go from being bored home alone, to shakin’ their tooshes at  house parties  with his smash hit ‘Free Yard’. Mr Santos more recently, teamed up with Pussycat Dolls stunner Kimberly Wyatt to bring us ‘Candy’ another likeable hit single – which sold over 200,000 copies. He’s back with a vengeance, celebrating his new debut single ‘Saint or Sinner’ a genius title name taken from his forthcoming album – out next month. We engaged in relaxed convo during Aggro’s trip into London – about Carlos Santana, Brazil, and Peruvian American Rapper Immortal Technique notably remembered by his disturbingly chilling yet powerful track ‘Dance with The Devil.’

What did you most enjoy about the summer tour supporting Chipmunk this year?
I had a lot of fun it’s always good to go and support someone on tour and let their fan base know about you and what you do.  The Chipmunk tour was perfect because his fan base is the kinda fan base that will be buying into what I’m doing as well. It was definitely an enjoyable experience – and it developed me as an artist and taught me new things – I fully enjoyed it.

How was it working with Kimberly Wyatt from The Pussycat Dolls?
That was really enjoyable, Kimberly’s a really down to earth person despite all her success. That also taught me a lot, if I ever need advise she’s the kind of person that would just give it, she was a real pleasure to work with, She’s a proper sweet person.

What’s your favourite memory of your homeland Brazil?
I just love the fun times on the beach, I really like the food, the lifestyles completely different – it’s more relaxed and laid back. You know when your in London it’s all congested and work work work! I prefer it personally, to go and relax and have a holiday as opposed to a place to live.

Where did the name Aggro derive from?
I was called Aggro throughout my secondary school phase when I was coming up during the whole Grime thing, and battling – it was a name that reflected me and how I was at that time. As I started to create more popularity, which wasn’t something I intended to do – I just thought you know what? I’m onto something there. I need to make it more commercial, and move away from the whole Street Grime thing. As I was getting to a point where I knew I was gonna get signed any minute – I decided to change it to Aggro Santos to soften it up and make it more appealing also because I started to incorporate a lot of Latin into my music, and Santos is my surname so – just makes it very clear to everyone.

Who would you most like to collaborate with?
Do you know what? It’s always been a dream of mine to collaborate with someone like Carlos Santana. When I was like 10 – 11 years old, my mum bought me a guitar and it got me into music. I had his very first album which was called Supernatural – it had Maria Maria, and Smooth, all of those songs on it – I used to get the guitar and learn to play to all the songs. His style mixed with the kinda stuff I’m doing now – we would have an awesome result.

Who do you most admire out now?
I’ve got a lot of respect for Lady Gaga. She came out and she came out differently. And she doesn’t give a damn about what anyone thinks, she’s so creative. – I would say her at the moment. I’ve seen a lot of videos of her live and if you see how much effort she puts into everything she does – she deserves every bit of success she’s had. Which artist could you not go a day without listening to?
It’s very underground, not a lot of people know him but I listen to Immortal Technique every day. He’s a Peruvian activist rapper he’s proper deep and stuff. I remember when I was younger I heard his song called ‘Dancing with the Devil’ and it’s basically – a twisted tune and it makes a lot of peoples belly’s turn – just the depth and everything about it, apparently a true story. It’s about growing up in Harlem New York, gangs and stuff – he retells a story about a guy who wants to join this gang, he describes it so well, you should listen to this tune! It’s about 8 minutes long…After that I started listening to more of his stuff – he’s got a lot of knowledge to spill out.

We love ‘Candy’ It’s a hot track. What’s your favourite song of yours?
I like my different kinda not-so-commercial stuff. I gotta a free mix tape on my website called aggrosantos.com. There are songs on there flowing on a Bossa Nova slash Hip-hop beat. I really like Saint or Sinner as well. My favourite songs are some of the songs that are on my next album. My next single which is most likely gonna be ‘Like U Like’ – I really like that song, I did it with the same producer that works with JLS, Susan Boyle and Westlife. I just gave it that Aggro Santos twist, to make it a bit cooler!

Free Yard was a top video on Channel U… Do you miss Channel U?
[Laughs] Yeah I miss what it was back in the day, and it definitely put my foot in the door. The Channel U audience wouldn’t appreciate what I’m doing now.  A song like ‘Candy’ the kinda people that like Channel U and listening to Grime and stuff – wouldn’t rate ‘Candy.’ I’ve moved on, but I’ve got a lot of respect for Channel U, and I think it’s very important for breaking new artists. Everybody whose out now in our scene from N-Dubz, to Chipmunk Tinchy Stryder, to Tinie Tempah even –  we all started off having a big tune on Channel U  from 2006-2007 and building up that foundation. I think Channel U gets under-rated and doesn’t get the props it deserves for breaking everybody that it’s broke you know what I mean?

Speaking of Channels which Channel do you kick back to and watch the latest videos?
You see Sky yea… I like MTV Base but I like it when their playing tunes and not all of that ‘Yo Momma’ and flippin that Dance Battle stuff – I can’t be arsed with all of that! Sky are clever – they put all the music channels together, so you’re never just there on one channel. You always like 352, 353 skip 355 that’s the Rock one 356, 357, and then you skip that Classic one then your on to Kiss and Flava. I dunno, I do like MTV Hits actually because it plays the Top 40.

Complete this sentence. Music is..?
Everything to me, the air that I breathe, it’s the food to my soul – it’s everything that I do on a day to day basis and it’s what keeps me going. If I wasn’t doing it I would probably just be doing bullshit! Or not doing much! Life revolves around music – and influences everybody.