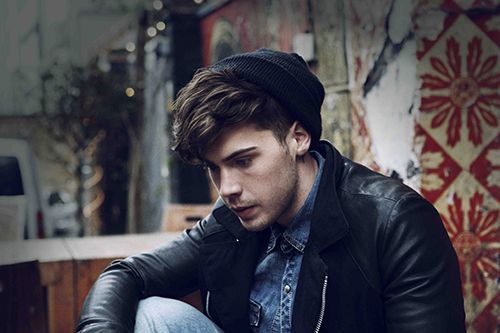 There’s a sense that desire has driven Aiden Grimshaw’s career up to now. He emerged from several different worlds: he was a runner up on the X Factor in 2010, a former Pizza Hut employee and now a solo singer with a major-label deal. Although he upholds immense talent and ability, Aiden is no ordinary pop star. Already his debut album is hinting at a promising future. Though he thinks of himself as being ‘awkward’ his music tells a completely different account. Ahead of the release of his debut ‘Misty Eye, we caught up with Aiden to discuss his new single ‘Curtin Call’ and more… You’ve had an intense few years. How are you adjusting to all the attention?
For the last two years, there hasn’t really been much attention as I’ve kind of lost the trademark quiff. Since then I have been able to live a normal life, but it’s kind of starting again.

From Pizza Hut to finishing ninth on the X Factor, I think it’s fair to say not many people were expecting to see you landing a major deal, releasing a top 30 single and announcing a headline tour…
Yeah, it’s mental… [Laughs] It’s gone pretty well when you put it like that. The opportunities you get when you go on a program like the X Factor along with the platform you’re given and the amount of people that gets to see you just makes it an amazing show.

Your former X Factor companions have been rather busy; Rebecca Ferguson has found out that ‘Nothing’s Real but Love’, Matt Cradle has been running for his life, whilst One Direction have been ‘Up All Night’ and Cher Lloyd has been swagger jagging. Have you spoken with any of them since the show?
I speak to Matt quite a bit as he lives near me, so I don’t mind going on a run with him. Apart from that One Direction, are up all night, but I like my sleep. [Laughs]… And Rebecca has found out nothings real but love with no money, no car, no house. [Laughs]

What about Simon Cowell who previously described you as “One of the best contestants”?
No, I think he’s a pretty busy dude. I don’t even think he’s got me on speed dial.

You seem quite eccentric at times. How would you describe your daily life?
I am pretty awkward. I think I have got weirder as I’ve lived on my own. I actually reckon the more time you have on your own is the weirder you become.

Is that a good thing?
[Laughs]… I hope so, but I suppose I have yet to find out. You’ve put me in a situation where I’ve spent a whole week on my own.

You’ve worked with rapper Smiler on your debut album ‘Misty Eye’. What other highlights should we also look forward to?
That’s the only collaboration we’ve got going on the album. I think there are a few other highlights on there and it’s hard for me to pick one because if I’m listening to the album that becomes my favourite one as they all mean different things at different times.

Were you a fan of Smiler before you worked with him? And does live up to his character, is he forever smiling?
I was really scared before I met him, I didn’t know what to do when he came into the studio. I thought was he going to be like ‘Oi, yo, one two, one two’, but then he came in, and he was just a dude man. He took all my notes on board, everything I told him about the song, where I wanted to go, what I wanted to say, and he was really, really cool.

You seem to have followed in Adele’s footsteps on your album in terms of lyrical encounters with love, having difficulties breathing and even getting down on your knees?
Yeah! I tend to get down on my knees when I’m too drunk. I’m only 20 so it was important to find something that was relatable, and that was worth talking about. One of the biggest things I have done in my life that’s worth writing about is being in love, but it’s not all really about being in love and breaking up with somebody. It’s more about the question of what love is, why we fall in love, is the ideals and all that sort of stuff. I think it’s something that everybody goes through, I’ve actually got a friend who is sh*t in relationships like he can’t hold onto a girlfriend for more than four months. Every time I’d write a track that I felt meant something to me; I’d take it to him and be like ‘can you relate to this you’re sh*t with girlfriends.’ [Laughs].

Since you’re groovy X Factor audition of ‘Gold Digger’. Has Kanye West been in touch at all?
Yeah, I can’t keep Kanye West away. He keeps sending private messages on Twitter, he was even ringing my Mum the other day, I keep trying to tell him I don’t have the time at the moment to be fitting him in…[Laughs] I’ve actually had no calls from Kanye, but I’m glad because he would probably be like ‘Yo man, you ruined Jamie Foxx’s part’…[Laughs]

Speaking of Kanye, he’s written a song called ‘Perfect Bi*ch’ about girlfriend Kim Kardashian. Have you got a perfect bi*ch?
I’ll say Kelly Brooks because I watched Piranha 3D last night, and I saw her in all that 3D goodness. She looks good in 3D.

Your new single ‘Curtin Call’ is somewhat addictive. What’s the inspiration behind it?
It was after a mad night out, where I was in a dead happy mood. I came back that same night, and I saw a piano which I started playing and suddenly out of nowhere I had this vivid picture of Hugh Grant on his knees in the rain at the end of some kind of romcom. It was like a big epic love moment, and that’s how I wrote the song. The song is also a bit like a big love letter where you end at the same place where you started.

Do you find performing pleasurable?
Yeah! I done a gig the other day at Hyde Park and the feeling that you get when singing your own songs to people means a lot.

What else makes you nervous, besides having these interviews?
Waiting for things makes me nervous. The more you wait the more nervous you become, if you had asked me about the album a couple of weeks ago, I probably would’ve said ‘No, I’m dead excited.’ As the weeks have gone on, I’ve nervously been sat in my flat asking ‘What’s going to happen.’

And before we wrap up, we’ve got a few unusual questions to ask you from our ‘Celebrity Generator’…

Stretch your left arm out as far as you can, what can you touch?
A cushion

Can you close your eyes and raise your eyebrows?
Yes

How do you eat your cookie?
Just all in one

What is bothering you right now?
I’ve got my leg crossed over my left leg with some sort of horrible substance on the bottom of my shoe.

Aiden’s new single ‘Curtain Call’ will be available to download now, whilst his debut album ‘Misty Eye’ will follow behind on August 20 and is available now to pre-order here.