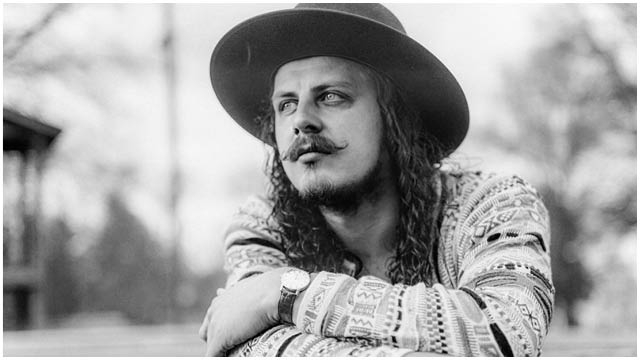 Metaphors using the albatross (in literature) as a signifier of human endeavour and endurance abound so the fact that Adam Stockdale uses that as his moniker already evokes ideas of a musician who has taken a long arduous journey and come out successful.

However maybe marathon flights across the sea do not necessarily fit the man but his debut album Desperate Times Best Forgotten has taken three years to make and release so surely that fits the bill (pun intended).

Albatross at any rate has travelled through the musical landscape picking up accolade upon accolade notably from that awesome force of musical nature MumFord and Sons who he toured with.

Indeed the touring and of course the logistics of creating an album particularly when everything recorded was live forms the main reason for the wait of his thirteen track album that is as he states is : ‘my life story’.

It’s an album detailing the emotional highs and of course lows of life where death, sadness but also joy can be found and it’s sure to enchant new and old fans when it is released on the 18th August.

Your moniker is Albatross a bird who flies the seas for years explain that name?

It’s funny, people ask this one a lot. I’ve never really been a literature buff, so I really hadn’t paid much attention to the associations and omens that others have pointed out in relation to the albatross. I do think it is a beautiful bird, but honestly I chose it as I am a massive Fleetwood Mac fan-I certainly hope it’s not bad luck.

Your musical history is enviable-explain what some of the most important moments in your history have been-Mumford and Sons tour must have made a massive impact?

I always try to take the most from any experience and also make the best of any situation. Ever since I was a kid my mum always taught me; always try your hardest and always be a nice guy. I have to say more than anything I think that has helped keep me in good company and open to opportunities. People just seem to like having me around and so that’s opened a lot of doors. The Mumford guys were great to me, always wanted to play and always up for the crack. I’ve seen first-hand how being that big can change your life and definitely eat away your free time and energy, but they were always supportive of what I’ve been doing.

So you are UK born and bred but living in one of the beacons of music Nashville explain the move and how it has helped you musically?

England will always be my home and I’m proud of where I come from but America’s attitude has given me opportunities that just were not available back home. In particular the fact that I play folk which seems to still hold so much weight especially in the South. My other reason-well life seemed harder and quicker in London which makes it tough to step back and look at things-you are just surviving.

So the obvious question (though touring must have played a part) why three years to bring the debut album?

I can’t believe looking back it took that long, it certainly wasn’t the plan. I have two more albums written already. Still I think more than anything it was just hard to get everyone together at the same time, all the musicians are writers and touring musicians in their own right. I also wanted to record live as much as possible, so the scheduling had to be elegant to say the least. It certainly won’t take that long again, I’m hoping to have another record out next year. The Beatles released every year, and sometimes twice a year. They did alright!

Obviously WOM (Word Of Mouth) is a brilliant inclusive fan concept when and why that decision to do things this way?

Thanks. The industry more than ever seems to be the Wild West. So I figured in a world where anything goes, why not do it the way you believe it should be done. I still feel “word of mouth” is the best way to spread news. So I want all my fans out there telling others about my art, but I don’t expect it, so for those who do, I want them to share in the rewards. We’re all in it together. Folks can find out all about it at www.thewordofmouthproject.org

As a whole explain the 13 track album?

Despite the fact that today’s mediums of music availability promote singles and playlists more than ever. I think this record stands as a body of work. It’s my life story and observations over a period of much change and tragedy. But more than anything it’s a message of hope. Emotionally it feels like a big milestone to be finally getting it out there. I hope it will help others through the rain to the rainbow.

Garrett Miller co-produced what did he add to your album in terms of direction?

Garrett was awesome, we first met in 2012 I think. I was introduced to him by Ross Holmes who played fiddle on the record. I had a pretty good idea of what I wanted to create and my references, but was so happy to find someone I could trust to create it. I think the combination of my British singer/songwriter roots and both G’s and the musicians various Bluegrass/Country/Soul roots we created a really unique sound. He knew his gear and space inside out, I just had to play.

Burden to Bear is the lead single –give some meat on the bones about that track?

Musically this song was a lot of fun, my part is really simple, just big open tuned chords, but the way it built up with E guitar, and Keys was great. Kai wrote this lovely Nick Drake kind of piano part. It was certainly my favourite electric tones on the record too. Lyrically it’s probably the most important to me, its’ about my mum’s struggle with Parkinson’s and dementia-she’s an incredible woman!

Which tracks (that come to mind) have been creatively most rewarding?

As I primarily play acoustic these days, it was real fun to get out the Les Paul guitar here and there-we played a lot with tones. So Leave Me Be was real fun also I Want You To Always Know. The trombone player Dave came up with this beautiful intro that sounded like a music box. Recording Matt’s banjo on Waitin’ On A Love was great fun, just watching him in general is a treat.  There were a lot of funny moments as we played live. It was just a great group of people. I feel very fortunate.

Any news on your coming dates and of course any further collaborations with Mumford and Sons?

I have a tour coming up in the Fall here, a bunch of communion dates, I’m going to go and see the Daytrotter folks again, A Nashville launch show-As much as possible really.