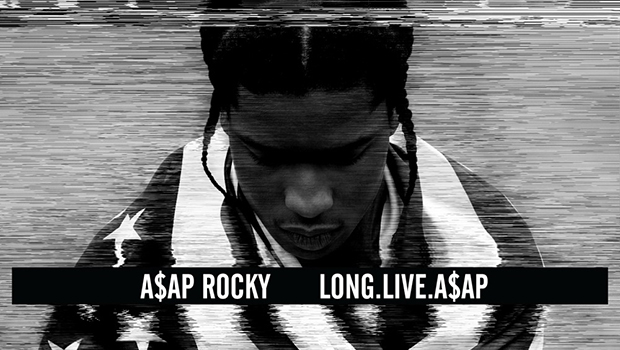 All hail the self proclaimed “pretty boy.” Not only was his outfit “in Vogue,” he’s finally delivered a diverse but solid debut album effort – ‘Long.Live.A$AP’.

Unfortunately a vicious leak link meant a mastered copy of his album hit the net a whole month before its January 15 release date. ASAP took it in his stride though and shortly afterwards he released the album title track. Straight out of Harlem, the New York outcast who “knows high-end fashion” is often noted as not having a typical Harlem sound. “I don’t even like New York rappers,” says the native who’s 2011 mixtape, ‘LiveLoveA$AP’, housed chopped and screwed, spaced out, airy and bass-fuelled beats.

Opening debut studio set with the Jim Jonsin and Rico Love produced title track, Rocky delivers his signature slick, polished vocals over a bass line heavy but minimal, melodic beat. Not for the easily offended, he couples expletives with explicit recitals of behaviour such as “nose bloody from that sniffin’, your heroin addiction.” In all the grittiness of the lyrics, ASAP delivers a seamless contrast as he softly sings of living forever on the hook.

Track two is lead single ‘Goldie’. Here ASAP implements his authentic, vocal inflections and does one of his evidently favourite things – distort his voice on the chorus. He continues what his lead single started on one of the album’s absolute highlights – the Skrillex produced, ‘Wild For The Night’.

Morphing his voice for the first part of both verses it displays how ASAP’s voice can get lost in the production, to the point it almost seems as if he’s competing rather than collaborating with the producer. It works in this setting though and ASAP delivers killer, catchy verses; “you don’t really want that glock boy/ you don’t really wanna feel them shots boy/ you a B boy, I’m a block boy/ I’m a D boy, I’m a hot boy” which are even better when his voice is his own. The manic dubstep hook is a perfect musical embodiment of Rocky’s plans to “f*ck being polite” and go “wild for the night”. Perhaps an “ASAP Rocky VS. Skrillex” credit would have been more apt.

Moving on from “bad b*tches” in the album’s second single and a 2012 hit, ‘F**kin’ Problems’ but still in the category of female-centred songs comes ‘PMW (All I Really Need)’. Schoolboy Q features, providing the subtly comedic lyric “whoopsy daisy, put a good kid in your section.80”. Perhaps one of the songs most memorable lyrics – this highlights ASAP’s occasional loss of himself in his own song.

Ghetto Symphony is a dark, deluxe edition track featuring Gunplay and fellow mob member ASAP Ferg. Whilst ASAP’s verse is strong, as he speaks of his life as an “outcast my whole life so I decide to spit like Andre,” it’s his comrade, ASAP Ferg, who is most memorable. Opening his verse on Rocky’s rendition of a ghetto symphony: “since Rocky spit like Andre I’m gon’ kill em’ like Big Boi.”

Pretty Flacko justifiably gets lost in the hookless, posse cut – ‘1 Train’, which features a total of seven rappers. Debates over who went hardest are a given as ASAP opens with a strong verse followed Kendrick Lamar, Joey Bada$$, Yelawolf, Danny Brown, Action Bronson and Big K.R.I.T. Attempting to “take it back to the essence of the 90s,” the all stars of the Hit-Boy produced ‘1 Train’ are all up and coming rappers. New kids on the block you might say, bringing back what ASAP calls “the generation of the underground.”

The same genration that are sometimes discredited as producing lyrics of poor quality. It’s true that not all of ASAP’s lyrics are wholesome, relevant or coherent but he definitely uses his voice as an instrument, working with the music. He has no problem speaking about difficult topics though. The hollow beat of ‘Phoenix’ commands it be listened to intently, as he speaks of suicudal thoughts, alluding to Michael Jackson and Nirvana’s Kurt Cobain in the song. Most importantly as the title indicates, it’s shows how once burnt, this “trendy n*gga”  has risen from the ashes.

‘Suddenly’, ‘LVL’, and deluxe edition track ‘Angels’ are some of the ‘Long.Live.A$AP’s’ calmer tracks with no features and ASAP kills them all. As mentioned previously  his (assumed) conscious choice to use his voice as an instrument is what makes these tracks so memorable along with the production. Certain lyric and beat element combinations will plant themselves in your head – without or without listener permission and or attention – they’re just that unique and catchy.

The only downfalls are ‘Fashion Killa’ and ‘Hell’. They are not actually bad songs but a look at the tracklist prior to the album’s release and you, like myself, may have been expecting something different of each track but what can you really get from a title. ‘Fashion Killa’ acts as the (in comparison to ‘PMW’) respectful female-centred song on the album while the uniquely, undefinable Santigold offers her vocal services on ‘Hell’s’ hook. The only two tracks that may warrant more than one listen before you’re sold.

ASAP also works well with Florence Welch on the last of three deluxe edition tracks, ‘I Come Apart.’ Her high pitched voice comes down to a nice level, complimenting Rocky’s rap but not at all compromising how unique the collaboration is. Whilst Florence shines as ever, it could be debated that an uncertainty is evident in ASAP’s voice as he tackles a project probably the most different to anything he’s used to.

“So now I’m getting change, people looking at me strange/ like n*gga switching lanes, never changed, still the same,” which is absolutely true. Blink and you might have missed the compilation mixtape ‘Deep Purple’ or ‘Peso’, ‘LiveLoveA$AP’ and the signing of a $3million record deal.

It all happened so fast. ASAP presented his style, stuck with it and the fans loved it, which is exactly why he can get away with the diversity of songs on the ‘Long.Live.A$AP’ set without a typical “you sold out” backlash. Notice how he said people are “looking” at him strange not “talking,” and looks don’t mean a thing (most likely neither do words and definitely not album leaks) to the A$AP Mob’s default frontman, who  has “creative control” of his music. “There’s no b*llshit,” he says.

F**kin Problems, the album’s second single and it goes without saying, is a certified banger. ASAP himself even noted how every record label would love if an album contained 10 or so bangers like it and so would we. Instead after a long delay, we have a tight 15-track debut that even without hit after hit, requires no skipping. Every album has those tracks that just get skipped over and over but here, the brightest mob member right now, delivers the right mix of hype hits, calm tracks and collaborations.

The second album is always the most career-defining and we can’t wait to see where goes with it after delivering such a dope debut.