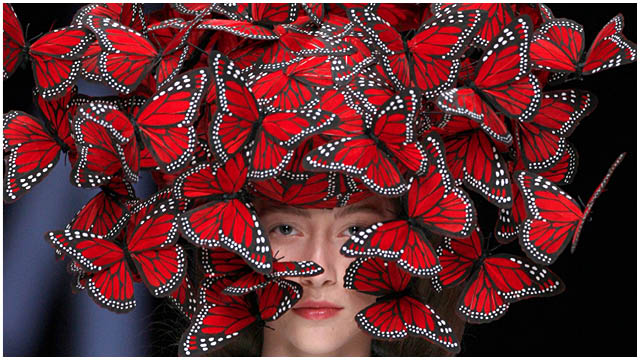 The new exhibition at the V&A exploring the life’s work of legendary British fashion designer Alexander McQueen is a superb showcase of one of the greatest creatives to come from the renowned MA fashion course at Central St Martins.

This exhibit is filled with meaning and creates a very emotional experience. It cuts deep.

Claire Wilcox senior fashion curator of fashion at the V&A worked alongside the Met’s Andrew Bolton as consultant curator to produce a show exploring the concepts, materials and McQueen’s fascination with the beauty and savagery of the natural world which has inspired new generations.

Alexander McQueen was London born and bred , his father was a cab driver. McQueen trained as a tailor on Saville row at the tender age of just 15. His experience in tailoring influenced all of his work.

The exhibit as a whole is visually stunning and has been created with fine detail from the use of technology and holograms is truly spectacular. The first section Un-Natural Selection, s/s 2009 collection is set in quite an industrial looking space most likely inspired by his shows set in industrial locations across the capital. His presence is felt throughout, with the use of eery surround sound systems and haunting whispers of the late McQueen. Each collection is previewed in different rooms which emulates each creation through the clever use of bespoke mannequins and well considered lighting. The cabinet of curiosities is the most gripping section, with one off displays of his many accessories from bejeweled headpieces, bodices and iconic pieces such as the armadillo shoes and the spray paint dress originally painted by two robots in the live show. ‘I don’t think like the average person on the street, I think quite perversely at times’

Alexander McQueen promoted freedom of thought and expression and championed imagination and originality through cutting and construction he presented fashion as a medium. I have always been widely inspired by McQueen and have always thought his work lies beyond fashion as a whole I would highly recommend this exhibition to anyone who has an interest in fashion.

‘I want to be the purveyor of a certain silhouette or a way of cutting, so that when I’m dead and gone people will know that the twenty first century was started by Alexander Mcqueen’

Go to www.vam.ac.uk/museumofsavagebeauty for more info