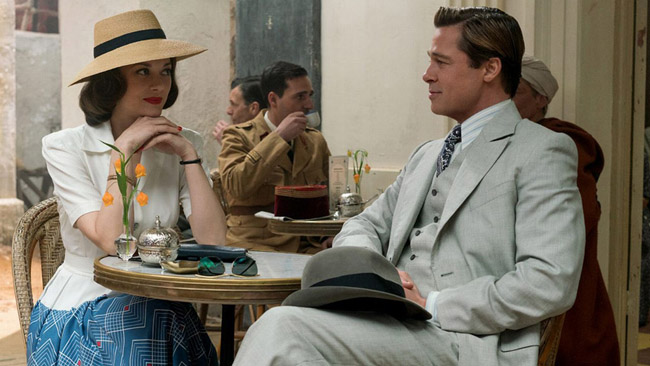 Robert Zemeckis has brought us some cinematic classics over the years from Back To the Future to Forest Gump, so expectation may be high for his wartime spy thriller Allied with Brad Pitt and Marion Cotillard at the helm. So it pains to say that this transportation into World War II has less fizzle than an unexploded bomb.

Brad Pitt may look dashing, like a golden age of Hollywood heartthrob, and Cotillard oozes style and bad ass grace but the lack of screen chemistry and a narrative that just plods along with no real urgency, intelligence or exciting sparks leaves a feeling of being slapped by a cold dead fish. The only longing anticipation felt is a constant twist that never comes, one that is so desperately needed to give this sorry episode a much-needed injection of life.

The first quarter of the film is spent in Casablanca where Max Vatan (Pitt) – a Canadian spy working for the British – and Marianne Beausejour (Marion Cotillard) come together as Man and Wife but both undercover secret agents with one mission, to assassinate a German Ambassador. The beautiful Marianne is already established in the set with Max – a mining engineer- joining later and only supposedly being able to speak French. As the pair works closely together on their plan on killing the ambassador at the ambassador’s ball they fall madly in love with each other – Each splendid setting at times is placed to remind the viewer of the classic beauty of age-old Hollywood, some would say stealing scenes from the likes of Casablanca. Whilst not quite witnessing the couple making love we are given the hint as their passion’s soar in a car in the middle of a dessert which has a swirling sandstorm whipping up a frenzy all around them.

With the assassination complete the pair head back to a heavily bombed London, but of course living in the very swanky Hampstead area with spectacular views of Hampstead Heath. Now married with a child, Max is called upon by his commanding office (Jared Harris) and a stern looking Military Intelligence Officer played by the ever splendid Simon McBurney to inform Max they believe his wife is indeed a German Spy who is under investigation and by no means is he to conduct his own investigation, oh and if it is found that she is her life is to be ended at his hands.

This is where you begin to hope for the suspense and twists but it never quite rears its head, each scene is played out like we are just going through the motions. No real love or affection is felt for either of our leads and it’s just a race against time to wish this monotonous World War II adventure is over, A complete waste of acting talent that could have been better put to use elsewhere.

Allied is in cinemas November 25th.