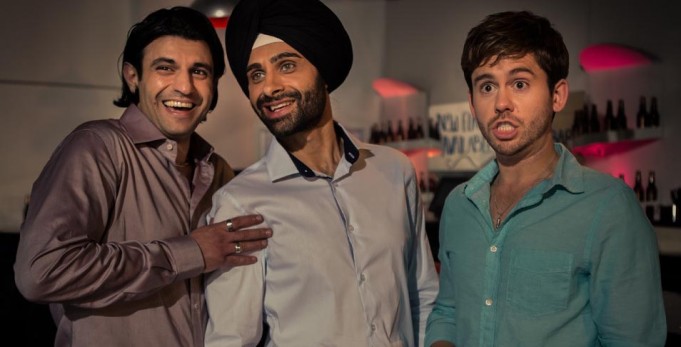 A romantic comedy set in a multicultural London, well Hounslow to be precise, focusing on three lifelong friends consisting of a Sikh, A Muslim and an Irish Catholic all at their young prime of life and ready for life’s adventures.  Its heart is in the right place, but it just doesn’t quite entice.

Amar (Rez Kempton), Akbar (Sam Vincenti) and Tony (Martin Delaney) have been friends since childhood, cultural backgrounds haven’t caused any boundaries, and they are brothers for life. Amar has a bright future ahead of himself as a Lawyer. Just as he lands himself a top job and gets engaged to his childhood sweetheart, things take a turn for the worse when he defends Tony and his infatuation for an Indian girl and ends up going to prison. Skip forward three years, Amar is released from prison and reunites with the boys who are behind him all the way as he tries to rebuild his life.

Amar, even though he has been to prison, is the sensible one, Akbar, is the womanising and vain estate agent (from a dodgy money lending family) and Tony is the lazy, jack the lad who never seems to have any luck with the ladies as he simply just tries too hard. It won’t be long before you realise you have seen these characters before. All in their mid-twenties, the boys start to realise it’s time to grow up. As Akbar and Tony are very much a side story, we see the boys finally find love. Akbar with a blonde white girl who doesn’t, at first, fall for his smarmy estate agent charm and Tony with Amar’s very modern and promiscuous sister even if she does put up a good fight at first even though she has had a lifelong crush on him. Whilst it is full of charming values and light-hearted moments its lack of budget and bumbling sequences seem disconnected, there aren’t any truly laugh out loud moments but a grin and a chuckle at the likes of comedy veterans Meera Syal and Nina Wadia’s little cameo appearances as an Indian dating services agency worker and a dating match for Tony in random scenes seem to ‘up the game’ of this film, even if just fleetingly.

To round of this story, Amar was never looking for love but it finds him in the form of his Uncle’s wife. This is where the story touches on the subject of sexuality and how in many cultures being homosexual is a sin and means being outcast from your family so it’s best to keep well and truly locked up in the closet. After a brief battle and a suicide attempt, Amar wins the girl and we are left with a group of mixed weddings to give the film it’s happy ending.

Amar, Akbar and Tony is full of Charm but not so much grace, a few too many subjects and storylines to get your head around and dries up on any real comedy. However, the attempt to show the world that all cultures and race can live together in sweet harmony, and bring a much-needed injection of diversity into the film industry deserves a greater nod than it will receive.