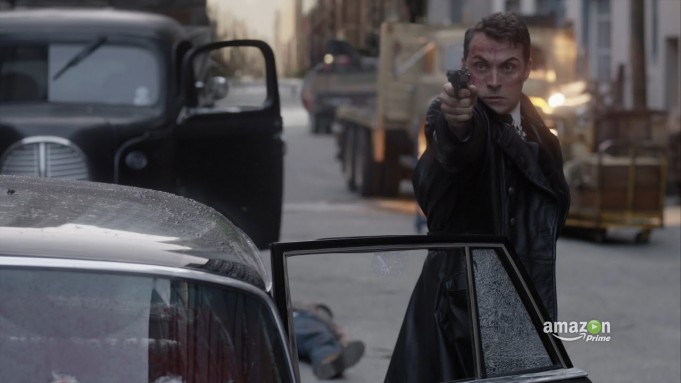 The pilot and second episode of the critically acclaimed Amazon Original series THE MAN IN THE HIGH CASTLE will be available for no-charge at www.amazon.co.uk/highcastle beginning at 12am/Zero hour on Friday 10/23 UK time, ending at 23:59 on Sunday, 10/25 UK time in the US and UK.

Following the Preview Weekend, the show’s second episode will available exclusively to all Amazon Prime Members, prior to the season launch of all episodes on November 20th.
Based on Phillip K. Dick’s Hugo Award-winning alternate history novel, THE MAN IN THE HIGH CASTLE, explores what would have happened if the Allied Powers had lost World War II.
The show was developed by writer/producer Frank Spotnitz along with Executive Producers Ridley Scott, David Zucker, Isa Dick Hackett and David Semel – who also directs the pilot episode.  The series stars Alexa Davlos, Rupert Evans, Luke Kleintank, Rufus Sewell, DJ Qualls, Joel De La Fuente and Cary-Hiroyuki Tagawa.
All Episodes of  THE MAN IN THE HIGH CASTLE launches on Amazon Prime on November 20th, exclusively for all Prime members. Prime Video is the U.K.’s largest online video streaming service, offering subscriber’s unlimited access to over 15,000 popular movies and TV  episodes. Customers who are not already members can start a 30-day free trial  of Amazon Prime by visiting www.amazon.co.uk/prime