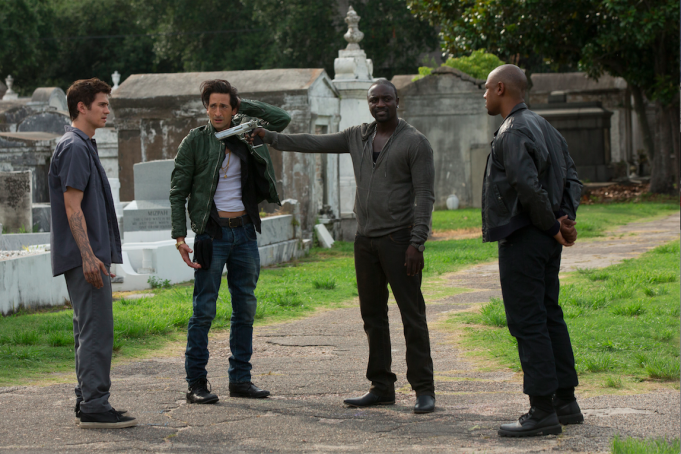 The first thought you may have is “oh really, not another heist movie”  and you would be right to think that but the film has some positives, With the likes of Hayden Christensen, Adrien Brody, Jordana Brewster  and a surprisingly good Akon starring in this film, it’s the acting that stands out more than the generic storyline.

James (Hayden Christensen) has a dark past, but now he is trying with all his might to change his life. Meanwhile, his older brother, Frankie (Adrien Brody), who served ten years in prison, is released. He attempts to start a new life that James did not add up: as an ex-con, he cannot expect to get a good job. Seeing this, Frankie offers James to “conduct a little business”. He swears it’s the last time and after a bank robbery in New Orleans, they have money, and they will rebuild his life and get back what was once lost. As a result of “a little business”, it will become one of the most dramatic and bloody attacks in American history…

Essentially this is a story about two brothers, one who is a career criminal who needs and wants to rebuild his relationship with his brother who he has let down in major way. However, no sooner as Frankie is released from his 10 year prison sentence, he’s back on the streets and trying to drag his brother down with him, getting him involved as an accessory to a murder in order to blackmail him into carrying out a heist that will change their lives forever.

This isn’t one of your greatest heist movies and with an over saturated market with this genre expect to witness nothing but your typical clichés, but with most heist movies nothing quite goes to plan and the best of the action comes at the end with a massive shoot out between the heist gang and the police, were we get to witness quite an unexpected and shocking outcome which just proves the love Frankie has for his brother.

I wasn’t quite sure how Adrien Brody, as an ex-con was going to work, No I can’t see that happening, but yes it does work, and he play’s it well, even though it’s still hard to get your head around. One minute he comes across as quite a little weasel, the next he’s vile and violent, but deep down has nothing but love for his brother. I was a little disappointed with Jordana Brewster’s role, it felt slightly stiff and they needed to throw in a love interest just for the sake of it. American Heist was obviously made on a budget, but this doesn’t seem to have affected the quality of the filming which is slick and tight and the enticing of some well-known actors. It’s a good effort all round and is extremely watchable, just don’t expect anything too exceptional.

American Heist is released digitally in the UK, available on demand on all major platforms, on Monday June 22nd 2015.