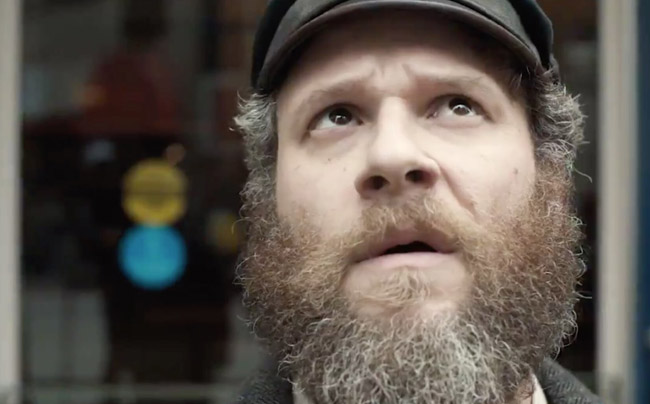 Seth Rogen takes on a double role in his latest Jew-baiting comedy, full of all-knowing comedy of the crunchy satirical type.

Simon Rich has adapted his story for a feature-length film where the cracks start to appear and lull in the witty banter soon dry up as it ventures down that old familiar emotional family rollercoaster ride.

Opening in 1919 in Słupsk, northern Poland, Rogen plays the role of the bearded Herschel Greenbaum, a poor Jewish man whose biggest dream in life is to earn enough money to buy him and his wife, Sarah burial plots. Once the Cossacks descend on the village destroying everything and anyone in their path, Herschel and Sarah are unbelievably the last two standing and decide to immigrate to New York. On their arrival, Herschel manages to get himself a job at a Pickle factory catching rats but soon finds himself at the bottom of a pickle vat just as the factory is condemned.

Fast forward to 2019, after being preserved for 100 years, Herschel finds himself in unfamiliar times when he is claimed by his great-grandson, Ben – also played by Rogen, a hipster living app developer who dreams of taking his ethical company detector app global.

The gags come thick and fast in the first half of this film as cracks begin to rear their ugly head amongst the cultural differences between the pair. Whilst Herschel is all for tradition and religion, Ben couldn’t be any more different. With Herschel adamant to make enough money to reclaim his burial plot by selling rather questionable pickles from a cart – which the hipsters just can’t get enough off, surprise surprise – A family war between Ben and Herschel commences giving light to antiquated opinions and cancel culture.

When it comes to the witty repertoire, Rich provides a rich and clever script which induce the heaviest of belly laughs, but in an attempt to stretch out this story it ventures into the mulch of family quibbles making it lose valuable momentum along the way but there is a sincere empathy felt for both characters despite each of their flaws.

Rogen plays Rogen the best way he knows how it’s almost as though he is channelling his own self and that of his Jewish heritage without any effort and the performances are all the better for it. This is a movie which is purely made for him.

Director Brandon Trost by no means has made a groundbreaking comedy but it’s Borat like feel, gives this an all too relevant tongue in cheek vinegary stab at those who take themselves way too seriously. This is one pickle that won’t make you smart away from the sharpness of its taste.