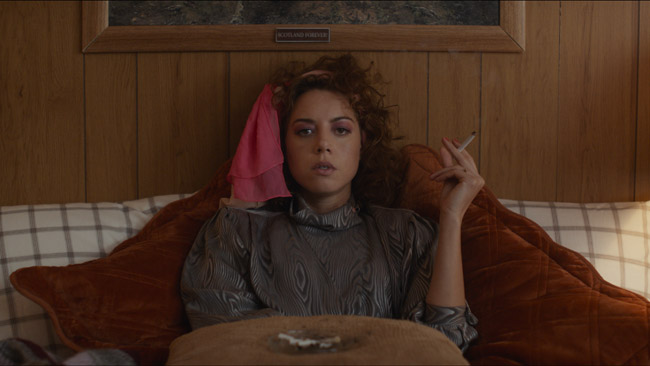 Bizarre is quite an understatement for filmmaker Jim Hosking’s An Evening with Beverly Luff Lynn. The Greasy Strangler director has made insane his comfort zone, giving frat boy humour an edge of credibility with his latest which quite frankly takes bizarre originality and bewilderment to new levels.

The story focuses on Lulu (Aubrey Plaza), a coffee shop worker, married to the egotistical and controlling Shane (Emile Hirsch), the boss of the chain of less than thriving caffeine suppliers. Shane and his goon workers see an opportunity to rob her brother. Unsatisfied by her life as a married woman, and the fact that her ex, Beverly Luff Lynn (Craig Robinson), is back in town for one night only, she grabs her opportunity to make a run for it with hired hitman Colin (Jemaine Clement) for a long overdue reunion.

Holed up in the hotel of Beverly Luff Lynn’s one and only performance – of which remains a complete mystery throughout – a cat and mouse chase between a number of characters begins. Colin falls for Lulu hard but Lulu only has eyes for the big hulking man who only communicates via grunts and groans. Beverly’s assistant and partner Rodney (Matt Berry) infected with the green-eyed monster after realising who Lulu is, tries to keep the pair apart by any means necessary; including drugging Beverly’s tea. All the while the Jack Blackesque Shane also wants his wife back – and the money she stole – and tracks her down to the hotel forcing Colin to pull out the protector role for her safety.

Completely bizarre, there will be a certain type of audience that will instantly see this as a cult classic, a marmite consistency means you will either love it or hate it. The characters feel over exaggerated, rigid in their movements and awkward deliverances rain down with intelligent intention. Hosking’s keeps audiences hanging on a string long enough to invest their interest in discovering exactly what Beverly Luff Lynn’s loyal audiences love so much about his eyebrow-raising, Scottish inspired performance.

Oddball and bizarre engulf everything that describes Hosking’s vision but there is just something that leaves you highly annoyed but thoroughly entertainment simultaneously.

To book tickets or for Home Entertainment purchases click here