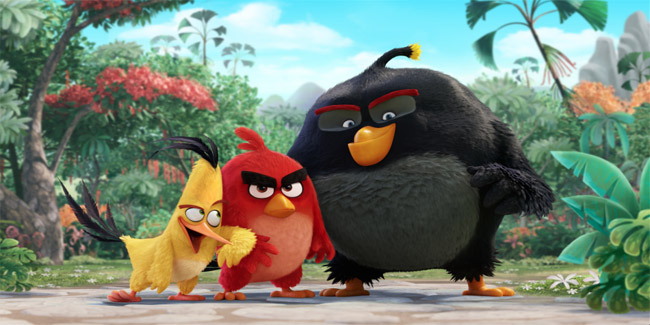 Games to film adaptations are increasingly on the rise and our next comes from the very popular Angry Birds, even though the game has no storyline. A recipe for disaster written all over it, it comes to fore it that it is entertaining and fun… to a degree.

Angry Birds Movie, however, doesn’t come without its faults. For its first hour just seems to go on and on and on, dragged out to make it’s hour and a half running time. Yes, this is used to build the story which Directors Clay Katis and Fergal Reilly has helped conjure up from nowhere. But it seems to have helped them no end in delivering a light-hearted animation with a touch of emotion for its lead bird, Red but lacks in a huge amount of funny moments or dialogue.

The story begins with Red (Jason Sudeikis), the only angry bird on the remote tropical island being sentenced to anger management classes. This is where he meets his fellow companions, a speedy Gonzalez type character in Chuck (Josh Gad) and Bomb (Danny McBride) aptly named so for his extremely volatile personality. When a boat load of green pigs crash land into Red’s home, sparking his anger yet again, he and his fellow classmates decide to investigate what their true motive is for coming to their island. The story seems to build and build and build before something of any note really happens, and the real point of the story unfolds. The pigs have invaded the island to steal the bird’s eggs. Leading up to this we learn how our three heroes ended up in anger management. Red’s back story consists of him being bullied as a child and having no friends, parents or family of his own causing his anger issues. However, once the eggs have been stolen the action truly starts. From here out the more notable sequences appear one in the form of a gross-out moment where the birds start drinking and bathing in Mighty Eagle’s lake only to discover this is his own personal urine. Angry Birds is host to a number of comedic actors, and this is where the studio has outdone themselves in the pairing up of their animation characters. Sudeikis as Red delivers an abundance of sarcastic one-liners. Sean Penn takes on the grunts and groans of the over-sized Terrance with a comedic flare. Gad and his one hundred miles per hour babbling is a perfect fit for the overzealous chuck and we even have Peter Dinklage as the Mighty Eagle, who isn’t so mighty anymore in his retirement.

All the waiting is worthwhile when we enter the final stages of the film; this is where we see the influence of the actual game come to light. As our three heroes team up with the rest of the birds from the island to bomb their way through the pig’s city to save the eggs, even giving us an insight into the special powers of particular birds. This final act is where the most effort is made, with its toppling buildings and funny dialogue making up for what was a dyer beginning.

Angry Birds Movie is in Cinemas May 13.