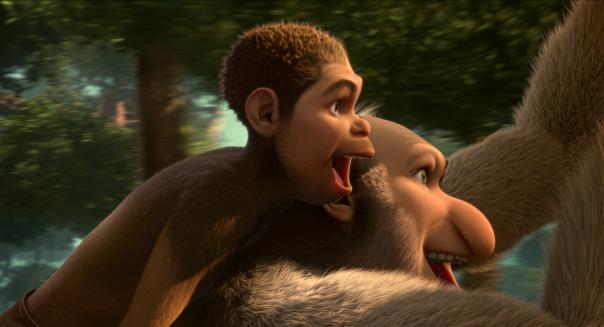 The story of evolution should be taught to all kids as part of their education but in this day and age it’s hard to keep their attention for very long. Animal Kingdom: Let’s Go Ape, essentially a French animation (yet in English) tale, tells this in a fun way to keep the kids entertained.

The story revolves around Edward, starting at his birth, alongside his big brother, he is rejected by his tribe of fellow apes including his family as he looks different, he is small and weak and not what should represent the head of the ape tribe. Instead of killing the baby Edward he is left in the wild. The next time we see Edward, he has grown into a teenage ape, looking very much human with his slightly dumb best friend (an orang-utan).

Edwards character tries to be relevant with his dialogue dipping into slang which the younger generation can relate to, with references to ‘Golden Balls’ and even at one point descends into a speech with ‘I have a dream’. Whilst some may think these lines are inappropriate, its references like these that give this animation an air of light hearted comedy.

As we follow Edward in his discovery of which he really is, it’s refreshing to see that he holds no grudges and his attitude to his new family is extremely laid back even if he is still rejected by the tribe. As Edward’s father realises who he is he pays him the attention he has lacked and his brother becomes the jealous one causing a nasty little rivalry and a plan to kill Edward off. In the meantime, rejected by the tribe yet again thanks to his brother and cohorts, Edward is evolving, he learns to walk on two feet and develops his brain for inventions becoming the first ape to evolve into a more human type species. Saving the tribe he was once rejected from, from the destruction of their home amongst the trees. Whilst the story flows like a river however, there is no real effort made to really make the audience connect to any of the characters. It makes no real mark on the viewer and it’s not a film you will take away with you and think about.

Whilst this is never going to be a classic or even remembered for very long as something doesn’t quite fit, Tries a bit too hard and lacks an emotional connection to the characters, it’s still a fun little animation that shouldn’t be written off without giving it a try.