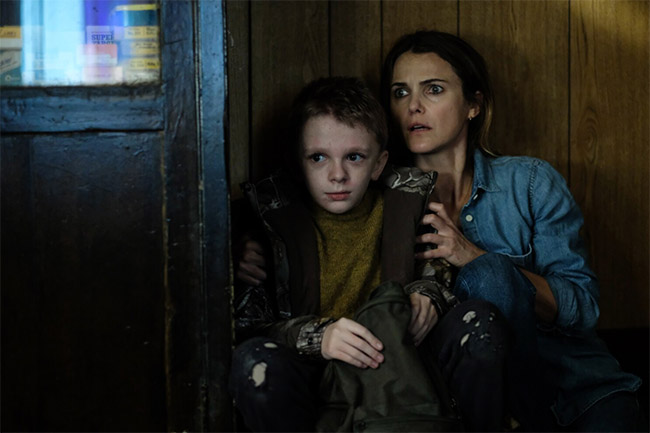 Filmmaker Scott Cooper and producer Guillermo Del Toro delve into the world of indigenous folklore in the long-delayed horror. Delay seems to be the dish of the day, as the drawn-out convoluted story tries to build a foundation filled with multiple themes before finally transforming into an anti-climax.

Keri Russell heads up the cast, taking on the role of small-town teacher Julia, having returned home many years after her own experiences of abuse at the hands of her Father. Now living with her brother Paul, played by Jesse Plemons, the gormless local sheriff, Julia has concerns one of her students, Lucas (Jeremy T. Thomas) is experiencing the same kind of abuse at home due to his detachment and the horrifying drawings he doodles in class.

Apart from a pretty intense opening scene, the audience is slowly dragged through the mud for practically the first half of the movie with a lack of any intensity to leapfrog off when the action finally starts to kick in. Questions are raised as to why Lucas kills animals and takes them home – showing all the signs of a future serial killer. All the while Julia discovers Lucas’s father has a history of violence and getting into trouble with the law but not before the staple flashbacks reveal her own past and her current problem with staying off the sauce.

As the pieces start to form a coherent picture in the final third, the Native American former sheriff, played by Graham Greene, identifies the monstrous flesh-eating creature to be one stemmed in lore, and one that has appeared in many films across the ages – it’s just a shame that Greene was the only actor of indigenous origin to appear in a story based on their culture…

Jeremy T. Thomas performance as a psychological scared and scared child is heartbreaking to watch, the unbelievable brother and sister relationship between Plemons Russell leaves you feeling cold. Yes, they had their own issues to deal with from their childhood but there is zero connection at all.

Although this is only approximately an hour and a half, too much time is spent setting the scene and hinting at the theme of child abuse and white privilege. When we finally do get to the core, and gore, of the lore it’s over way too quickly leaving a feeling of being cheated of what initially had a decent enough premise.