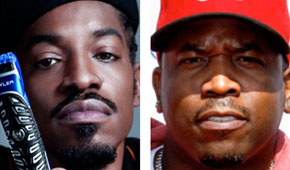 You would think, after being in a band with someone for almost a decade and touring the world with them, you’d be close. Close enough to, say, for them to agree to feature on your new album.

But it appears Andre 3000 and Big Boi are not as close as before. Despite both members previously insisting there is no friction between them, it turns out there really is something going on out of sight.

Earlier this week, whilst promoting his new album Big Boi was asked why he’s bandmate, who he last worked with in 2006 did not have a feature on his new album.

He told The Village Voice, “He could’ve been on any song he wanted to. I gave the motherf**ker about five songs, but I guess he was just too busy. He said he had to do some Gillette s**t. No for real. He said he had some contractual obligations.”

This seems slightly awkward considering the fact Andre managed to fit in features with T.I., Rick Ross and Frank Ocean alone this year.

However, Big Boi did attempt to put out the fire by taking to his Twitter page, “The Gillete Statement was me being Sarcastic, man y’all slow as hell, No Beef (feud) between me and Stacks,” he wrote.