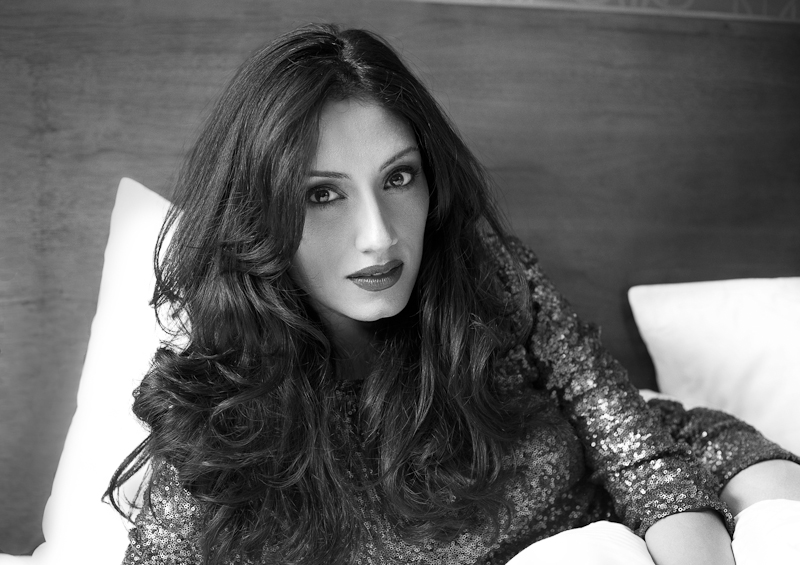 After her breakout performance in the critically acclaimed action thriller Children of Men, Tehmina Sunny recently followed up with a starring role in the award-winning CIA hostage drama Argo. The British actress now poised to conquer Hollywood provided her regal beauty—and imposing flair—to Ben Affleck’s gripping account of six American diplomats smuggled out of Iran during the 1979 Revolution by posing as a Canadian film crew.

While Tehmina’s scene is brief in this highly-charged, suspenseful box-office smash her role is somewhat pivotal in helping to add pressure and culmination to the film. Now gearing up for the sixth annual Toscars, an event featuring entertaining parodies of Oscar-nominated films, Tehmina gives us the low-down on working alongside Affleck on Argo, her ideal superpower and why she’s a huge admirer of Charlize Theron.

What’s your first memory of being onstage?

It has to be in my first school play of ‘Jack Frost’. I played a snowflake, singing, dancing and floating around on the stage, it was so much fun.

How does a Croydon girl like you keep grounded in the hectic world of Hollywood?

I feel Hollywood is projected completely different in the media, especially within other countries. To be honest, I feel living here is much calmer than living in London.

Is there an actor who has influenced you?

Charlize Theron has influenced me. I love how she transforms herself to each role she takes.

Are there any roles you’ve turned down that you regret?

Work and opportunities are rare. I try not to turn anything down.

What was your response after receiving the call for Argo?

I sat on the couch and took in how grateful I was to be involved in an amazing story. Then I jumped up and down on the couch!

What was it about the character and the script that attracted you to the project? How did this film speak to you?

I read the script and thought, wow, what an amazing story. I wanted to be involved in the project any which way I could. I liked that my role was in a pivotal part of the film, creating immense tension and climax.

Your scene with Ben Afflecx at the check-in desk has got to be one of the most intense airport displays ever.

I have to agree. It was the moment where it could have been make or break for the story to continue.

How was it working with Ben? Is he as pleasant as he seems?

It was superb working with Ben. He is a real actors-director. Down to earth, charming, chatty and enjoyable to be around.

In some parts, ‘Argo’ is quite intense. What kind of atmosphere was it on set?

In between takes a lot of chatting, but everyone was focused and brought their ‘A’ game to set.

Along with the historical background, what has been the most wonderful thing about being a part of this film?

Working with Ben. I have always admired him, so seeing him act and direct with such ease, made me inspired to want to direct one day.

Argo has also been nominated for seven Oscars. What do you think of your chances of bagging them all?

The film has been received so well that I believe it can bag it all!

Will you be attending the Oscars? If so, what will you be wearing?


I hope so…I’m spontaneous when it comes to clothing and like to see how I feel on the day of the event with what I will wear. As of yet I have a few dresses that are eager to make an appearance, but I shall still keep my eye open in vintage shops for a va va voom number.

‘Children of Men’ has become a new classic.

I am not surprised. A superb story and Alfonso Cuaron did an amazing job adapting it from the original novel.

You previously played Bridget Bailey in the TV show ‘Heroes’. Now, that you are already familiar with superpowers, if you could be a superhero, who would you be and why?

This is a tough one as there are so many powers I would love to possess. If I had to choose one I guess I would be a ‘Mentalist’. Possessing abilities, such as telekinesis, telepathy and extra-sensory perception like Professor X from X men.

What can you tell us a about the Toscars?

Every year after the Oscars are announced, the Toscars participants have only three weeks to make a short parody of the films that have been nominated. The films are played live in Hollywood and judged by celebrity judges.  It is a chance for the entertainment industry to have a good old-fashioned giggle.  Awards include  ‘Best Whactor’, ‘Best Whactress’, ‘Best Film’ and more.  The event is a black tie affair attended by many celebrities and members of the media.

Can you give us a sneaky peek about your starring role in the parody of ‘Argo’ ?


Expect original music, dancing and perhaps singing on a plane with a lot of fun talented actors.

What are the characteristics of a Toscars film?

To keep within the perimeters of the original project, but to be innovative and creative with lightness and a fun flare to it

What do you think is required into order to attract the attention of the judges?

Originality, humor, cinematography, depth, enjoyment and to be entertained

How do you maintain positivity when in the face of negativity?

It’s not easy, but doing something physical like running helps me.

When the Tehmina biopic is scripted, what would an actress need to have in her performance to make you say, “Bloody hell, she actually got me”?

A dry sense of humour!